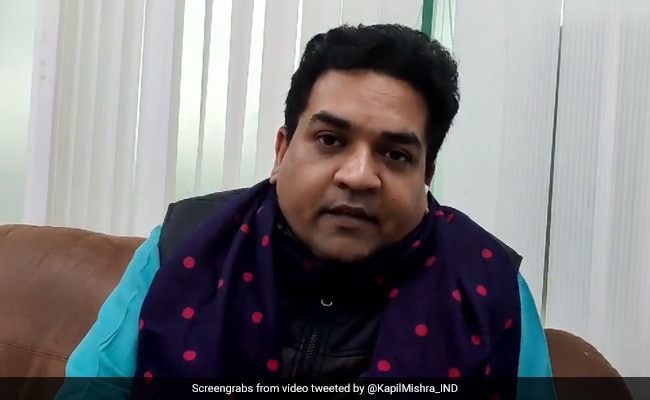 Jharkhand: Kapil Mishra said he had gone to meet the family of a teenager killed in a clash.

BJP leader Kapil Mishra, who arrived in Ranchi on Wednesday to visit the family of a 17-year-old killed in a clash during a procession to immerse the idol of Goddess Saraswati idol in Hazaribagh, has alleged that he was detained by Jharkhand police at Birsa Munda airport for about five hours and returned to Delhi.

BJP leaders said that Mr Mishra returned to Delhi by an afternoon flight as he was detained and not allowed to leave the airport.

Repeated efforts to contact the Ranchi senior superintendent of police, Surendra Kumar Jha for an official statement on the incident failed.

“Detained by Jharkhand police at Ranchi airport for last two hours,” tweeted Mr Mishra, who returned to the national capital in the afternoon.

In his tweet at 9.20 am, Mr Mishra said he was stopped by the police at Ranchi airport and was not allowed to exit from the airport.

“My point is clear. I have come to meet the bereaved family of Rupesh Pandey ji. I am ready to go to Rupesh ji’s house with a few people in a police vehicle. Stopping me raises questions on the intention of the Jharkhand government,” he said.

“Why is the government afraid of his (Mr Mishra) meeting with the victim’s family…Hemant Soren did not express sympathy as the victim is a Hindu…His grief knew no bound in the case of Tabrez Ansari,” said Mr Das.

Ansari was allegedly lynched in June 2019 when Das was at the helm in the state and the issue was raised even in Parliament.

Mr Mishra said he had talked to Pandey’s mother over a video call and was prevented by the police to come out of the airport.

“Pandey’s mother says nothing is acceptable to her other than the hanging (of) the culprits…I told her that the whole country is with her,” he said in another tweet.

The BJP leader also shared a video in which Pandey’s mother, who has reportedly stopped eating since her son’s killing, is seen demanding justice for her son.

“I have come from Delhi to tell you that we all are your sons. You are not alone. You have support from all over the world,” Mr Mishra said.

Pandey’s mother is heard in the video demanding hanging of the culprits to which Mr Mishra said it should be so as the killing was pre-planned.

The BJP leader said Rs 14 lakh has been collected from the people and the money will be transferred to her account. Legal help will also be provided.

“We will not stop till justice is delivered to you. Entire country is with you. I have been detained by the police. I will come again…We are with your family. Rupesh Pandey has sacrificed his life…We are indebted to your family,” Mr Mishra is heard in the video as telling the youth’s mother.

Meanwhile, BJP legislative party leader Babulal Marandi in a tweet alleged, “Jharkhand government is screening facts in Rupesh Pandey murder. First internet was shut down, section 144 was promulgated then false cases against those seeking justice were lodged. Now the government is digging its own grave by preventing Kapil Mishra from meeting Rupesh’s mother by stopping him at the airport.”

Pandey’s murder, which took place at Barhi in Hazaribagh district on February 6, had sparked tension in the region.

In another tweet, Marandi, a former chief minister of the tribal state, questioned, “Chief Minister Hemant Soren Ji, what message will be sent to the country and the world about Jharkhand by your repressive move in democracy? At least think about it. After all why are you stopping Kapil Mishra from going to visit the bereaved family?”

A five-member Jharkhand government delegation had met the youth’s parents earlier this week and promised them financial assistance and job to a family member. The delegation will submit a report to the chief minister.

Hazaribag SP Manoj Ratan Chouthe said that according to the findings of the special investigation team constituted by him the killing was not due to mob lynching. All the five accused in the case, who had personal enmity with the youth, have been arrested, he said.

Prohibitory orders under Section 144 of CrPC were imposed in Ramgarh, Hazaribag, Giridih districts after right wing groups called for a 12-hour complete shutdown in protest against the incident on Sunday when hundreds of activists took to the streets demanding justice for the victim.

Former Chief Minister Marandi had earlier visited the residence of the dead and said that the incidents of lynching prove that there is no law and order in the state.