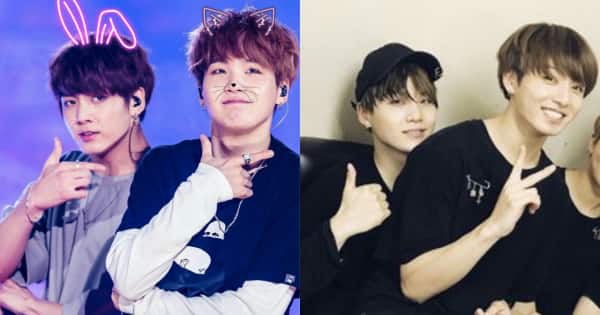 BTS aka Bangtan Boys is a seven-member band. However, oftentimes, they look so similar to each other that ARMY is left confused as to who is who. Well, it may happen due to the trick of lighting or angle or clothes/costumes, etc. And sometimes, it’s all just edited by ARMIES who are OT7. Or maybe it’s just Jungkook imitating his hyungs. So, there has been this old clip of BTS members – RM, Jin, Suga, J-Hope, Jimin, V and Jungkook, that has been going viral on the gram. And this has been observed by ARMYs across the platforms. The clip features Suga saying that a lot of people say that he and Jungkook look alike. Also Read – BTS: V unlocks new achievement as Christmas Tree debuts at THIS rank on Japan Billboard Hot 100 – deets inside

Taehyung who was sitting beside them had a funny reaction to the same. Shocked and in disbelief, Taetae screamed, “What, who said that?” The rest of the members were also taken aback a little. Well, we came across some threads on Twitter that had a similar outlook, that is, Yoongi and Jungkook look similar. Even the ARMYs were in disbelief that there’s so much likeness between the two BTS members. Well, they have lived with each other for so long. So, certain habits may have rubbed on each other, don’t you think? Check out the threads of YoonKook that we came across here: Also Read – Trending Hollywood News Today: BTS’ V’s Christmas Tree debuts on Japan Billboard Hot 100, Julia Fox and Kanye West’s PDA pic goes viral and more

Which one is jungkook?? pic.twitter.com/TkvbeilOLw

ok but lbr yoonkook has similar taste in fashion, the beanie, the boots, the jeans ?? pic.twitter.com/0PBrq2EbbC

the way yoongi and jungkook have similar jawline structure kind of does sth to me pic.twitter.com/NgXh3dKVlE

There are 3 jungkook here pic.twitter.com/dRosJgGyv0

I can’t unsee how similar their clothes are from hoodies to black inner :”> #sugakookie #yoonkook pic.twitter.com/RWwddWn42o

“Yoongi and Jungkook look like”
— a thread that will make you look twice pic.twitter.com/fj1KOhmQ3v

When yoongi turned into Jungkook during this seesaw performance pic.twitter.com/yVjX5UhoRD

Yoongi: ‘people say that me and jungkook look similar’ pic.twitter.com/hojikk0A45

I HAD TO DO A DOUBKE TAKE??? YOONGI AND JUNGKOOK LOOK SO SIMILAR SOMETIMES THEYRE SO HOT pic.twitter.com/J7WDpo9O8P

the similar hair, shirt, earrings, masks… this yoonkook right here is the epitome of “people say we look like each other” eyE pic.twitter.com/7Ke11jW0oV

For the viral video of Taehyung’s shocked reaction to Suga aka Min Yoongi’s claim of how he and JK look similar, check it out here:

BTS V aka Kim Taehyung just loves being extra. That was a really funny reaction, don’t you think? Anyway, what about the similarities between Suga and Jungkook? Let us know your thoughts by tweeting @bollywood_life.

Meanwhile, we are inching closer to Suga and Jungkook’s track Stay Alive for their Webtoon, 7 Fates Chakho. Suga has produced the music whereas Jungkook has lent his vocals. ARMY, we know you are super excited for the Suga X Jungkook collab for 7 Fates Chakho.