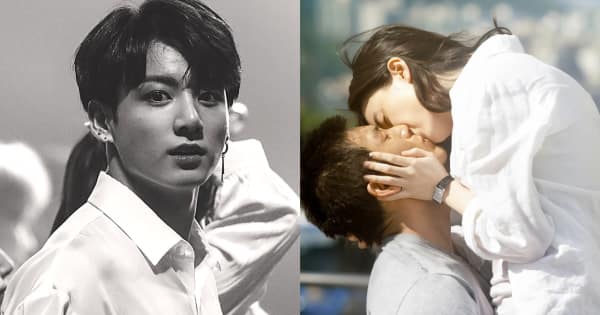 Bangtan Boys aka BTS are loved by ARMYs from across the globe. And ARMYs also include some who would love to be ‘the one’ in the BTS members – RM (Kim Namjoon), Jin (Kim Seokjin), Suga (Min Yoongi), J-Hope (Jung Hoseok), Jimin (Park Jimin), V (Kim Taehyung) and Jungkook (Jeon Jungkook), as per their biases, of course. ARMY would have imagined all kinds of romantic scenarios from films in their heads. What if the BTS members share the scene they want to recreate. Now, you would remember, ARMY, when Jungkook had shared that he would love to recreate the epic kissing scene between Go Soo and Han Hyo-joo from Love 911. Also Read – BTS x Naagin: Move over Tejasswi Prakash-Simba Nagpal, desi ARMY imagines V as hot sapera with Hobi as serpent – watch hilarious edit

Jungkook was a teenager back then. He asked was, “In films, is there a romance scene that makes you think, “I want to experience it!” The Golden Maknae of BTS said, “In the film ‘Love 911’, there was a kiss scene where the guy lifted up the woman with both hands. I want to try that (once) before I die.” Jungkook loves the film a lot. He was especially moved by the way, the two characters Kang-il and Mi-soo loved each other. In the scene, we see Kang-il surviving the building collapse. He rushes to meet Mi-Soo and likewise, the latter who had learned his name was on the list of victims. Let’s check out the scene from Love 911 here: Also Read – Trending Hollywood News Today: BTS ARMY supports RM, Kanye West deletes posts about Kim Kardashian, Oscars 2022 nominations and more

Wasn’t that WOW and romantic? A long time ago, Jungkook had shared his ideal type. As per Kprofiles.com, JK had said he wants someone who’s at least 168 cm but smaller than him, is a good wife, good at cooking, smart, has pretty legs, and is nice. Also, a girl who likes him and is good at singing. Talking about her personality, Koreaboo had reported that Jungkook described his ideal type to be “intelligent, talented, and competitive.” He would like a gamer girl who could play games like Overwatch with him. JK added that his girlfriend should impress him with her talents and should not be afraid to show off her strong points.

Elsewhere, on the work front, a couple of days ago, Stay Alive was released, crooned by Jungkook. In the other news, Jungkook is busy exploring Instagram. He has been sharing a lot of videos on his gram. He had been sharing his boxing videos too, pumping up those muscles like Kang-il in Love 911.