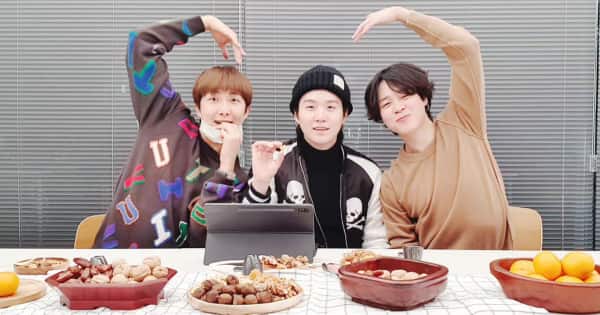 Three of the BTS members – RM (Kim Namjoon), Suga (Min Yoongi) and Jimin (Park Jimin) came live on VLive and interacted with their fans. IT had been a very long time since the BTS members had come live. The boys had been resting and enjoying their Holidays. ARMYs were sorely missing the boys and it was a pleasant surprise when RM, Suga and Jimin dropped live, finally. The boys talked about New Year’s in South Korea. RM, Suga and Jimin had walnuts in front of them and they were heartily eating away while updating ARMYs on what they were up to the past couple of months. Also Read – BTS: When J-Hope broke down on camera after receiving THIS message from his parents – watch throwback video

RM, Suga and Jimin shared what they did in the last couple of months while holidaying. Jimin who recently recovered from his appendicitis surgery revealed that he took up exercising two days ago and had been feeling very good. Suga, who had had his appendicitis surgery years ago said that it was good that the surgery happened while they were on a break as he got time to rest. Namjoon wondered whether he too will have to get the surgery done. Suga and RM asked Jimin whether it hurt who said that he has recovered well now. Also Read – BTS: Beyonce wishes J-Hope on his birthday; Hobi and ARMY are shocked – view tweets

The boys had a casual interaction wherein they also talked about Jimin being away from Instagram. RM asked him to be active and Jimin laughed and agreed that he would. The topic moved to Hobi aka J-Hope who is very active on Instagram and has the coolest feed. RM revealed that J-Hope is getting fed up with polaroids now since he started the polaroid uploads. Suga added that it’s kinda difficult to upload pics on three platforms – Weverse, Twitter and Instagram. Also Read – BTS X Gallan Goodiyaan: Jin, Suga, J-Hope, RM, Jimin, V and Jungkook dancing to Farhan Akhtar’s song amidst his wedding with Shibani Dandekar is AMAZING – Watch

The boys also talked about Taehyung who is recovering from COVID right now. Jimin revealed that he has been recovering well and they did a video call recently. Jimin revealed that they did pull-ups together. RM, Jimin and Suga also talked about their Seoul concert and said that they really wanted to see ARMY live in front of them. The boys asked ARMYs to be healthy and happy.

RM also spoke about Jin. He revealed that Jin weighs about 61 kgs and has broad shoulders. RM said that he wanted to lose weight. While reading the comments, an ARMY talked about Namjoon’s bulging biceps and Suga and Jimin quickly started admiring RM’s biceps. Suga also cracked open walnuts with his bare hand shocking RM, Jimin and the ARMYs. BTS is strong, RM commented.