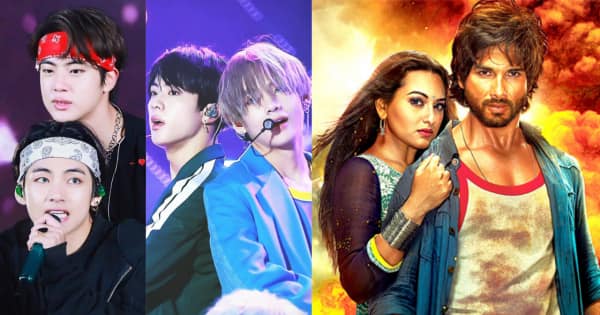 Bangtan Boys are goofballs in real life. Be it RM (Kim Namjoon), Jin (Kim Soekjin), Suga (Min Yoongi), J-Hope (Jung Hoseok), Jimin (Park Jimin), V (Kim Taehyung) and Jungkook (Jeon Jungkook), they all have their own kind of goofiness which leaves ARMY in a laughter riot. Today tannies, we are back with another BTS X Bollywood video. This one features only two of the BTS members that are Jin and V aka Taejin. It’s all in good fun, edited by one of the ARMY and perfectly captured the Tom and Jerry kind of equation between Tae Bear and Mr Worldwide Handsome. Today’s song is of Shahid Kapoor and Sonakshi Sinha, Mat Maari, from R Rajkumar. Also Read – BTS: Meet Kim Ji-hun – the 8th member who almost joined the septet as an idol

BTS’ Mathyung aka eldest member, Jin, has stepped into Sonakshi Sinha’s character whereas Jin has stepped into Shahid Kapoor’s roadside Romeo character. ARMY, y’all would know how much the members like to tease each other. And that goes for every member, right? BTS ARMY who made this video edit have included some of the goofiest moments between Taehyung and Jin. ARMY, you know how loud Jin gets when he gets mad, right? Well, there are a couple of shots of Jin getting angry and co-incidentally, TaeTae is by his side sometimes. Just how Sonakshi and Shahid’s chemistry was a fun watch, this video of Jin and Taehyung is a fun watch too. Check out the video here: Also Read – Trending Hollywood News Today: Priyanka Chopra to work with Marvel actor Anthony Mackie in Ending Things; BTS Jimin assures ARMY of speedy recovery and more

Recently, Jin and Taehyung grabbed headlines for their conversation on the latter’s post. Jin had called Taehyung’s picture a ‘boyfriend material picture’. Tae got all flustered and asked Jin to not post such a comment. He later deleted not just the comment but the entire post. Taehyung has this habit of deleting stories from his Instagram handle after a couple of minutes or sometimes even seconds. Meanwhile, BTS are currently on a break. Also Read – BTS: Kim Taehyung aka V prequel cartoon versions leave ARMY swooning; fans wonder how can an anime make them drool