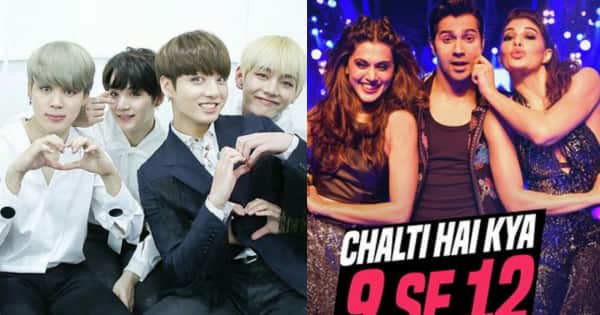 Hola BTS ARMY, we are here with another BTS X Bollywood fun edit. And today, we have BTS’ TaeKook and YoonMin aka Taehyung, Jungkook, Jimin and Suga grooving to Varun Dhawan, Jacqueline Fernandez and Taapsee Pannu‘s hit song Chalti Hai Kya 9 Se 12. The BTS X Judwa 2 song edit is a super fun one by the brilliantly talented BTS ARMY. The swag that TaeKook and YoonMin are oozing in the video is just lit and will leave y’all wanting for more. Also Read – Trending Hollywood News Today: BTS’ Jimin contracts COVID-19, undergoes appendicitis surgery; Cheslie Kryst dies by suicide and more

While Varun has a twin role in the movie, the BTS X Chalti Hai Kya 9 Se 12 edit features two of the BTS’ popular ships TaeKook and YoonMin. The video includes BTS’ choreographies from Dynamite, Boy With Luv, Butter, ON, DNA, and their performance on Baepsae from their concerts. The video also includes BTS members’ moments from BTS In Soop 2 and a lot of BTS’ variety show appearances. BTS X Chalti Hai Kya 9 Se 12 video also includes BTS members’ appearances in the awards shows. A couple of clips from Run BTS episodes. Jungkook’s goofy expressions also feature in the clip. Jimin’s power moves, Taehyung and Suga’s Swag leave you with a lasting impression. BTS ARMY, you keep wanting for more or even wish for a BTS X Bollywood dance video for real. You wouldn’t want to miss out on Jungkook aka Golden Maknae’s hip hop moves in the middle. Suga’s cute videos will make you go awww. Check out the video here: Also Read – BTS: Jimin undergoes appendicitis surgery, tests COVID positive; ARMY sends love with ‘Get Well Soon Jimin’ – view tweets

Meanwhile, recently, HYBE released a statement informing that Jimin had not been keeping well. The Permission To Dance and My Universe crooner had been diagnosed with acute appendicitis. Since he had a sore throat as well, he was to undergo a COVID test and was found positive. He underwent surgery for the same on 31st January’s morning. Jimin is recuperating well. The rest of the BTS members are enjoying their break. Recently, V aka Kim Taehyung visited the set of his friend Choi Woo Shik’s TV show, Our Beloved Summer. Suga aka Min Yoongi has been recording a song in the studio. He will be producing the soundtrack of BTS’ webtoon 7 Fates Chakho for which the vocals will be provided by Jungkook. Also Read – BTS: RM left embarrassed by SUGA, Jin, V on national TV as the members openly discuss the leader’s hotness quotient — watch throwback video