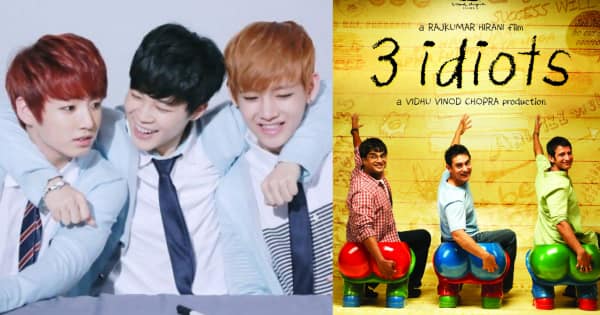 Hola ARMY, we are back with another BTS X Bollywood edit. This time it’s BTS X 3 Idiots. The maknae line of BTS has stepped in for Aamir Khan‘s Rancho, R Madhavan‘s Farhan ad Sharman Joshi’s Raju. BTS V, aka Kim Taehyung, plays Rancho while Jungkook and Jimin play Farhan and Raju. The video edit is done by ARMY and we were so impressed with their attempt that we thought of sharing the video with y’all. It’s in all good fun, of course. So, watch it just for fun and keep on dreaming about BTS’ India visit through these videos. Also Read – BTS’ V, Jimin and other members sweetly console a little girl who was SAD for leaving them; ARMY says they’ll be amazing parents – watch video

And ARMY, wait till to know about the whole cast of BTS X 3 Idiots. BTS’ leader, RM aka Kim Namjoon, stepped in for Viru Sahastrabuddhe played by Boman Irani. On the other hand, Jin, aka Kim Seokjin, is a professor. Suga is seen in Kareena Kapoor Khan‘s role as well as classmates’ role. J-Hope has stepped in for Omi Vaidya‘s Chatur Ramalingam. The video follows some amazing 3 Idiots moments that is loved by one and all such as the introduction of Rancho, the scene wherein Rancho defines books to the professor, Chatur giving out his bookish knowledge, Piya aka Bebo cursing Farhan and Raju for kidnapping her without knowing whether Rancho is married or not. Also Read – BTS: 5 ADORABLE moments of 2Seok aka Jin and J-Hope that’ll live in ARMYs heart rent free

The video edit of BTS X 3 Idiots also includes All Iss Well and Zoobi Doobi song in bits. And not to forget the speech of Chatur! It’s edit’s quite well, we must say. Those who love BTS and the movie, y’all would love this edit. Though a short one with just a handful of moments, BTS boys as engineering students seems like a cool edit idea. Watch the hilarious and goofy video here: Also Read – Kumar Gaurav, Rahul Roy, Bhagyashree and more 1-hit wonders in Bollywood – view movie stills

Meanwhile, BTS are dropping their Artist-made collections which are getting sold out within a fraction of seconds. The price of the products seems to be another issue for ARMYs. On the work front, BTS members had a reunion recently and in Super Tuna style. ARMY cannot wait for the Bangtan Boys to get back in action.