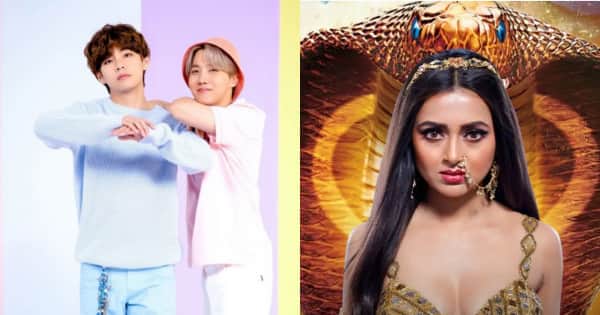 Bangtan Boys aka BTS are quite popular across the globe. However, sometimes, the ARMYs goof up with the boys that you are left scratching your heads in disbelief. So, we have come across a video that was shared by a Desi BTS ARMY on Twitter wherein the latest video of Taehyung was edited with an old video of J-Hope. Y’all know the viral video of Taehyun playing trumpet, right? So, that has been turned into a spoofy video by someone. So the video includes Taehyung as Saphera while Hobi is seen grooving like a serpent, not literally, but it looks so in the video. So, it is time to move over Tejasswi Prakash and Simba Nagpal starrer Naagin 6? Well, you watch the video and be the judge: Also Read – Naagin 6: ‘Tejasswi Prakash is hardworking and passionate’; Simba Nagpal showers praises on his co-star

Other Desi ARMYs have reacted to the video. They expressed their disbelief over the same. Some fans commented that they hope Ekta Kapoor doesn’t see it. “Stop , leave my boys alone, this shit all over on my tl,” one of the ARMYs wrote. Another one said, “naurrr creativity on its highest,” yet another one said, “WHAT THE ACTUAL FCK Chet Baker won’t forgive you. I won’t forgive you.” Yet another ARMY asked the boys to announce their comeback dates as ARMY is going crazy, in reference to the video. Check out the reactions here: Also Read – Trending Hollywood News Today: BTS ARMY supports RM, Kanye West deletes posts about Kim Kardashian, Oscars 2022 nominations and more

Tf srsly i spilled coffee on my laptop ???

I love y’all but that right there is BLASPHEMOUS CONTENT JWJEJFNENDNEMFME pic.twitter.com/unrSqDDfa5

Who made this we need to talk pic.twitter.com/wQA2h93SIe

Meanwhile, the Bangtan Boys are currently chilling out. They have been on a break since December, right after their concert in LA. BTS members RM (Kim Namjoon), Jin (Kim Seokjin), Suga (Min Yoongi), J-Hope (Jung Hoseok), V (Kim Taehyung) and Jungkook (Jeon Jungkook) are exploring Instagram and sharing a lot of posts. Jimin (Park Jimin), however, has been away. He recently had surgery for appendicitis. He had also tested positive for COVID. Jimin has completed his mandatory quarantine but is still in the recovery phase. He is doing much better, Jimin said in his posts on Weverse. Also Read – Trending TV News Today: Tejasswi Prakash reveals Valentine’s Day plans with Karan Kundrra, Shehnaaz Gill-Shilpa Shetty’s pictures go viral and more