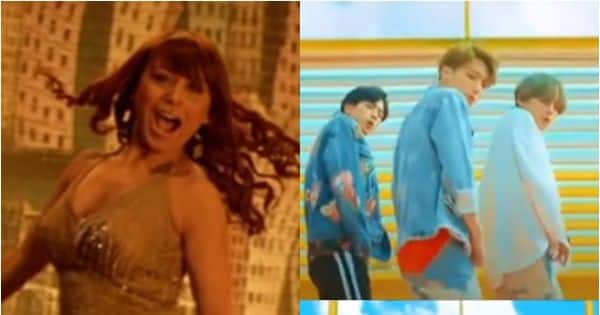 BTS members, Jin, Suga, J-Hope, RM, Jimin, V, and Jungkook, dancing to Indian songs is nothing new. ARMYs make edits in which they make their favourite K-pop band dance to Indian music. In the past few months, we have watched them dancing to songs like Oo Antava, Srivalli, Dholida, and many more songs. Today, it is Rani Mukerji’s 44th birthday. The actress has featured in many successful films and has also proved her mettle as an actor. Rani is also known for her songs and dance moves. Also Read – BTS: ARMY asks Jungkook to have a boxing match with V aka Kim Taehyung – here’s how he responds

Today, we came across a video of BTS members dancing to Rani’s song Ab To Forever from the movie Ta Ra Rum Pum. The film, which also featured Saif Ali Khan, was a hit at the box office, and even the songs were loved by the audiences. So, check out this BTS X Rani Mukerji video below… Also Read – BTS: ARMY uses cheesy pick-up lines on V and Jungkook; here’s how they responded

Well, many people on YouTube have loved this edit. A netizen has commented, “Wow this is one of my most favorite song. And this edit is juz so perfect you nice keep going. Borahae.” One more netizen wrote, “Yooo it matches!!” We have to say that ARMYs very well know how to match BTS’ dance moves to Indian songs. Also Read – BTS: RM aka Kim Namjoon apologises to his dad and the reason is COVID-19 – deets inside

Talking about Rani’s movies, the actress was last seen on the big screen in Bunty Aur Babli 2 which was released in November last year. Though the film didn’t do a great business at the box office, Rani’s performance in it was appreciated a lot. The actress will next be seen in Mrs Chatterjee Vs Norway which is slated to release on 20th May 2022. Well, fans of Rani are expecting that maybe on her birthday today, a new movie of the actress will be announced.