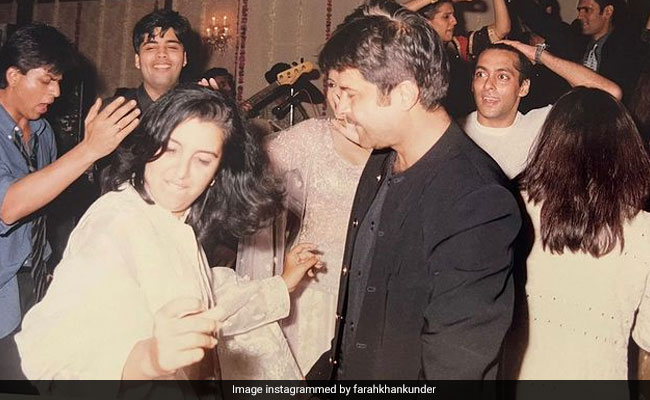 Farah Khan loves to share throwback pictures on her Instagram handle and her latest addition is extra special. To begin with, it features Shah Rukh Khan, Salman Khan in the same frame. Secondly, they can be seen dancing their hearts out along with Anil Kapoor, his wife Sunita Kapoor, Maheep Kapoor, filmmaker Karan Johar and of course Farah Khan. The aforementioned picture happens to be from Sanjay and Maheep Kapoor’s sangeet ceremony. Sharing the picture-perfect shot, Farah Khan wrote: “Those were the days! Anil Kapoor papaji in shock. Spot the very famous background dancers pls… Sanjay Kapoor and Maheep Kapoor’s sangeet.” She added the hashtag #dancelikenooneiswatching.

The comments section of the post was filled with remarks from stars. Sanjay Kapoor wrote: “Where are the Dulha dulhan?” Karan Johar, who also features in the picture, wrote: “Waah,” adding heart emojis. Zoya Akhtar commented: “So fun.” Sunita Kapoor’s comment read, “Faaaaabbbbb.”

Check out the throwback here:

Sanjay Kapoor and Maheep Kapoor got married in the year 1998 and they are parents to Shanaya Kapoor and Jahaan Kapoor. Shanaya will soon make her Bollywood debut with Bedhadak, which will be directed by Shashank Khaitan and produced by Karan Johar.