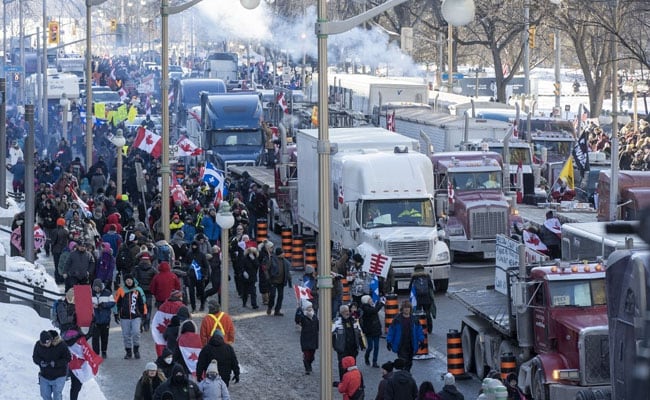 Canadian police moved Friday to clear a trucker-led demonstration against Covid rules, arresting 70 people and towing away dozens of vehicles that have been choking streets of the Canadian capital for three weeks.

But with hundreds of protesters with big rigs estimated to still be refusing to go, the gradual clearance process was likely to continue into the weekend.

Throughout the day, heavily armed officers — including on horseback — lined up against protesters who locked arms, advancing slowly and methodically to push back the spirited crowd.

An AFP journalist saw several demonstrators led away in handcuffs as police and tow trucks moved in.

A few demonstrators were wrestled to the ground, and at least one who refused to exit his truck had his windows smashed and was dragged out by police. Most simply surrendered.

“We’re in control of the situation on the ground and continue to push forward to clear our streets,” he said. “This methodical and well-resourced plan will take time and we are here to see it through to a safe ending.”

There have been no serious injuries, Bell said.

Demonstrators appeared to dig in after heavy snowfall, playing cheerful music and waving Canadian flags on hockey sticks. A bouncy castle was set up and a pig roast held in the street.

The so-called “Freedom Convoy” started with truckers protesting against mandatory Covid vaccines to cross the US border, but its demands have grown to include an end to all pandemic rules and, for many, a wider anti-establishment agenda.

At its peak, the movement also included blockades of US-Canada border crossings including a key trade route across a bridge between Ontario and Detroit, Michigan — all of which have been lifted after costing the economy billions of dollars, according to the government.

Overnight two protest leaders were arrested and charged with mischief and counselling others to break the law.

One of them, Tamara Lich, 49, was heard telling truckers as she was being led away by police to “hold the line.”

On Friday, a third protest leader was stopped in his car as he was live-streaming on social media.

Convoy organizers tweeted for supporters to “drop whatever you are doing, and make your voice heard” by coming to the capital.

Earlier, lawmakers took the extraordinary move of canceling a parliamentary session. Speaker of the House Anthony Rota cited an “ever-changing” situation in the streets outside the seat of Canada’s democracy.

At a news conference, Deputy Prime Minister Chrystia Freeland said the “illegal blockades and occupations cannot be allowed to usurp the authority of democratically elected governments.”

Justice Minister David Lametti added that the unlawful protests “pose an ongoing threat to our economy and to our security.”

Police on Thursday had given protesters a final warning to leave, as barricades went up to restrict access to the downtown protest zone and surrounding neighborhoods — encompassing more than 500 acres (200 hectares).

Criticized for failing to act decisively to end the protests, Prime Minister Justin Trudeau this week invoked the Emergencies Act, which gives the government sweeping powers to deal with a major crisis.

It’s only the second time such powers have been invoked in peacetime.

Lawmakers, split over the move with only a small leftist party backing Trudeau’s minority Liberal government, were debating its use when parliament was hastily shuttered.

New Democratic Party leader Jagmeet Singh told the Commons on Thursday that the protesters were “brazenly” trying to overthrow the government.

Conservative MPs accused the government of using a “sledgehammer to crack down on dissent.”

Trudeau has said the act was not being used to call in the military against the protesters, and denied restricting freedom of expression.

The objective was simply to “deal with the current threat and to get the situation fully under control,” he said. “Illegal blockades and occupations are not peaceful protests.”

Police this week also arrested dozens of protesters at border crossings, including four people charged with conspiracy to murder police officers at a checkpoint between Coutts, Alberta and Sweet Grass, Montana.

They seized dozens of vehicles, as well as a cache of weapons that included rifles, handguns, body armor and ammunition.

Authorities also froze the bank accounts of protesters and chocked off crowdfunding and cryptocurrency transactions supporting the truckers.