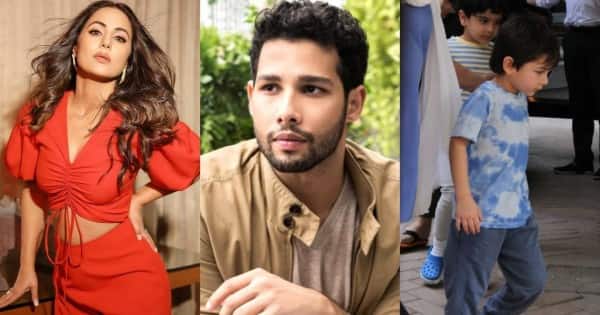 Shilpa Shetty, Siddhant Chaturvedi, Navya Naveli Nanda, Hina Khan, Sunil Grover, Salman Khan, Lata Mangeshkar, Aryan Khan, Shah Rukh Khan and others are among the top newsmakers of today from Entertainment. If you have had a busy day and want to know what happened in the world of entertainment, you are at the right place. Amidst dating rumours, Siddhant Chaturvedi drops heart emoji on Navya Naveli Nanda’s latest pictures, Hina Khan gets slammed by Sunil Grover fans for her latest tweet, Salman Khan pays tribute to Lata Mangeshkar as he sings ‘Lag Jaa Gale’, Aryan Khan raided Shah Rukh Khan’s wardrobe for IPL Auction 2022?Shilpa Shetty leaves for Alibaug with her family to celebrate Samisha’s birthday, Taimur Ali Khan dons a tie-dye tee on Sunday afternoon and other such stories are a part of our trending Entertainment news. So read on to know more about our Ent newsmakers of the day. Also Read – Aryan Khan raided Shah Rukh Khan’s wardrobe for IPL Auction 2022? This is what fans feel

Popular comedian-actor Sunil Grover underwent heart surgery and updated his fans about his health. Actress Hina Khan replied to Sunil’s tweet and wrote, ‘aarahi hoon oopar’. Hina has purchased a new house that is above Sunil’s apartment and the two will be neighbours now. Hina’s tweet was blown out of proportion by a few fans. Also Read – Raqesh Bapat joins Shamita and Shilpa Shetty for a family vacation…do we hear some good news SOON? [ Watch videos]

Amitabh Bachchan’s granddaughter Navya Naveli Nanda recently shared a series of pictures of herself and Gehraiyaan actor Siddhant Chaturvedi dropped a heart emoji in the comments section. If reports are to be believed then the Gully Boy actor Siddhant is in a serious relationship with Navya.

Bollywood actor Salman Khan paid tribute to the legendary singer Lata Mangeshkar as he sang ‘Lag Jaa Gale’ song and wrote, ‘Never has been, never will be any1 like u Lataji .’Several fans of Salman flooded the comments section as they poured their love on the actor. One user commented, “Until the very last minutes of world exists, lata ji’s songs shall be soared . Forever a legend” while another wrote, “Love your tribute.”

Bollywood actress Shilpa Shetty was recently spotted at Gateway Of India with her family. The entire Shetty family will celebrate Samisha’s birthday in Alibaug. Bigg Boss 15 lovebirds Shamita Shetty and Raqesh Bapat were also spotted together.

Recently, Shah Rukh Khan’s kids Aryan Khan and Suhana Khan attended the IPL auction 2022. The star kids filled daddy’s place and their pictures from the event went viral all over the internet. Recently, fans of SRK have been claiming that superstar’s 24-year-old son wore father SRK’s clothes to attend the auction.

Kareena Kapoor Khan is a fashionista and her stylish looks make everyone go weak in knees. Recently, Kareena and Saif Ali Khan’s elder son Taimur Ali Khan was spotted stepping out in a blue colour tie and dye tee. He looked super cute in the pictures as he stepped out on Sunday afternoon.