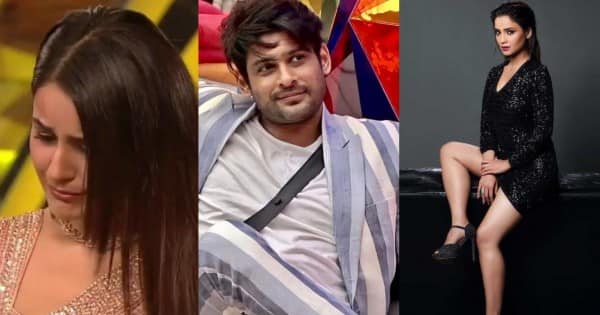 Bade Achhe Lagte Hain 2’s Nakuul Mehta and Disha Parmar‘s show has made viewers fall in love with their characters. In the latest episode, Priya aka Disha Parmar was upset and Mahendra Sood aka Abhay Bhargava slams Priya for everything that happened. Ram scolds Mahendra Sood for his bad behaviour. Netizens are bowled over by Ram’s cool swag and the stand he took for Priya against her father. Later, we also saw how he called her ‘Meri Priya’ while talking about Mahendra Sood’s audacity with Adi. Fans are going gaga over Nakuul’s ‘Meri Priya’ dialogue.

Naagin actress Mouni Roy got married to beau Suraj Nambiar in Goa on January 27. The two got married in two wedding ceremonies – Malayali and Bengali wedding. A video of their wedding reception went viral on social media, wherein Mouni and Suraj kissed each other.

Bigg Boss season 13’s Shehnaaz Gill will be seen paying tribute to late actor Sidharth Shukla on the show. As she appeared on the sets of the show, Shehnaaz started crying and gave Salman Khan a tight hug. The host of the show also got emotional and could not hold back his tears.

Bigg Boss 15 contestant Vishal Kotian was all set to release an old music video of him with Sidharth Shukla. Sidharth Shukla’s family released a statement and insisted that they should be informed before any content regarding the actor is aired. In an interaction with Hindustan Times, he said, ” It’s funny that I’m even responding to it. People are just contemplating that it was for Vishal. But I’m not a producer. Releasing a song is a producer’s call and not an actor’s. Sidharth was a close friend and if his family wanted they could have come up to me personally and addressed it, but I haven’t heard from them”.

Bigg Boss 15’s ex-contestant Rakhi Sawant and her husband Ritesh Singh were spotted on the sets of the show. In the video, Rakhi was ordering Ritesh to kiss her and within no time the netizens trolled the actress for her drama. One user commented ‘Chuma chanti chal ri h’, while the other wrote, ‘Ye koi RAMDIKHANA hai? Band karo ye gandi harqateim’.