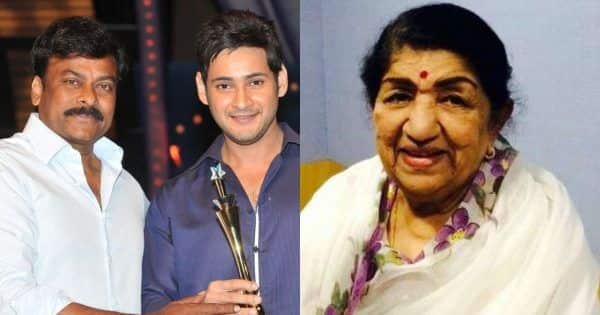 Chiranjeevi, Mahesh Babu, SS Rajamouli. Lata Mangeshkar, Naga Chaitanya, Nagarjuna and others are among the top newsmakers of today from South. If you have had a busy day and want to know what happened in the world of entertainment, you are at the right place. Chiranjeevi, Mahesh Babu, SS Rajamouli mourn Lata Mangeshkar’s loss, Naga Chaitanya opens up on Laal Singh Chaddha, Akhil Akkineni starrer Agent to have a pan-India release and other such stories are a part of our trending South news. So read on to know more about our South newsmakers of the day. Also Read – Trending Entertainment News Today: Shah Rukh Khan recites dua at Lata Mangeshkar’s funeral; Ranbir Kapoor-Alia Bhatt to get married in April 2022 and more

Chiranjeevi, Mahesh Babu, SS Rajamouli mourn Lata Mangeshkar’s loss
Lata Mangeshkar passed away on Sunday at the age of 92. She was unwell since the past few weeks. Her demise has saddened fans across the world. Several celebrities from the south film industries in the south, including RRR director S.S. Rajamouli, Chiranjeevi and Mahesh Babu among others grieved the loss of the legendary singer. “Lata Ji’s passing away is a huge and irreplaceable loss. She will live on in our hearts forever. My heartfelt tribute to the Nightingale of India. May her soul rest in peace. Wishing the family strength and comfort in these difficult times,” wrote S.S. Rajamouli on Twitter. Chiranjeevi tweeted, “Nightingale of India, one of the greatest Legends #Lata Didi is no more. Heartbroken. The vacuum due to this colossal loss can never be filled. She lived an extraordinary life. Her music lives on and will continue to cast a spell until music is there! Rest in Peace, Lata Mangeshkar.” Maheh Babu wrote on Twitter, “Deeply saddened by Lata Mangeshkarji’s demise. A voice that defined Indian music for generations … Her legacy is truly unparalleled. Heartfelt condolences to the family, loved ones and all her admirers. Rest in peace Lata ji. There will never be another you.” Also Read – Naga Chaitanya REVEALS what lured him to be a part of Aamir Khan’s Laal Singh Chaddha

Chiranjeevi tests negative for Covid
Chiranjeevi has recovered from Covid. The Acharya actor took to Twitter to inform that he has resumed work.