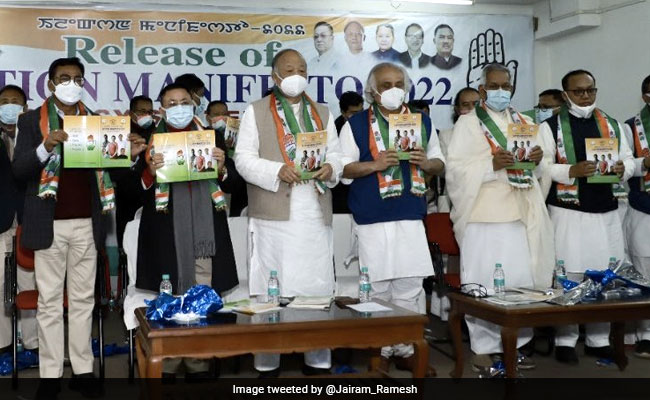 Manipur Elections: Polling in Manipur will be held in two phases- February 27 and March 3.

The promise is pertinent as the Isak-Muivah faction of the National Socialist Council of Nagalim (NSCN-IM) has been demanding for integration of the Naga-dominated areas of Manipur and its neighbouring states- Assam and Arunachal Pradesh- though the demand has been strongly opposed by them.

.@INCManipur released its Election Manifesto-2022. It’s a manifesto for the survival & revival of Manipur, & to bring development back on track.
It’s a commitment for the
—survival of democracy & diversity in Manipur
—revival of ALL sections & ALL people in ALL regions of Manipur pic.twitter.com/iKIQNwH80z

The democratic aspirations of all regions of the state will be fulfilled, the senior Congress leader asserted.

Manipur Chief Minister N Biren Singh also recently said that the BJP-led state government would ensure that special provisions under Article 371 (C) for hill areas would not be affected under any circumstances.

The Congress, which contested the 2017 assembly elections in the state alone, has adopted a flexible approach as it aims to deny the ruling BJP a second straight shot at power in Manipur, thus making a strong comeback in the poll-bound state.

Polling in Manipur will be held in two phases- February 27 and March 3 and the votes will be counted on March 10.