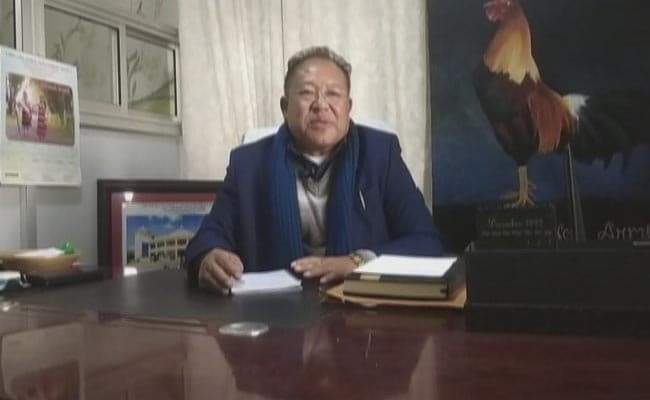 We are fighting alone, but still have a good relationship with the BJP: Awangbow Newmai, NPF state chief

A sub-plot in the electoral battle for Manipur this time has been the rivalry between members of BJP-led the ruling coalition, the latest episode of which on Saturday saw one of them accuse another of an outright “betrayal”.

The Naga Peoples Front (NPF) which is a key ally of the BJP in Manipur has claimed that another partner party of the government – Meghalaya Chief Minister Conrad Sangma’s National People’s Party or NPP – has betrayed other coalition partners in Manipur.

This barb comes after the NPP last week levelled a grave allegation that some of its candidates have been threatened by terrorists at the instance of the BJP and the NPF.

“We are part of the NDA (National Democratic Alliance) at the centre. Regionally, we are part of NEDA (North-East Democratic Alliance) and in Manipur partner in the coalition government. Once we make a commitment, we honour it. And that is why, even though we are fighting alone, we still have a good relationship with the BJP,” Awangbow Newmai, Manipur cabinet minister and the state president of the NPF, told NDTV in an interview.

“Now, the NPP is bringing some allegation but it is known that the NPP, which is also part of the coalition, has betrayed other partners,” he said.

The NPF will contest 10 seats in the 60-member Manipur assembly voting on February 28 and March 5. In 2017, they won four seats and helped the BJP form the government. This time, however, the party is not in a pre-poll alliance with the BJP is contesting against it and the Congress in 10 seats, largely in their stronghold – the Naga-tribe dominated hill areas of Manipur.

The party has this time made the repeal of the Armed Forces (Special Powers) Act or AFSPA and peace in the hill areas of Manipur their main poll agendas.

Despite appearing to be the most trusted regional ally of the BJP, it has kept its options open of forming an alliance outside the NDA. In a multi-cornered fight as Manipur is turning out to be, the NPF can prove to be a kingmaker.

“In this election, the main agenda is peace… apart from the demand of repeal of AFSPA. Nagas of Manipur want a peaceful solution to the Naga peace talks. We demand justice for the 14 Naga youths killed last December in Army firing in Mon district of Nagaland,” Mr Newmai said.

Political watchers say apart from the 10 seats that the NPF is contesting, the party has supporters in at least 25 of the total 60 seats in Manipur. Of them, 11 are in the Imphal valley region where the Naga voters are expected to vote en masse for the political party which the NPF would endorse – a factor that could go in the BJP’s favour. However, the NPF has said working with any party outside the NDA is “not a taboo” after the elections.

“It is not a taboo for our party to go with another party but the decision will be taken by our high command. As of now, we are with the NDA,” Mr Newmai added.