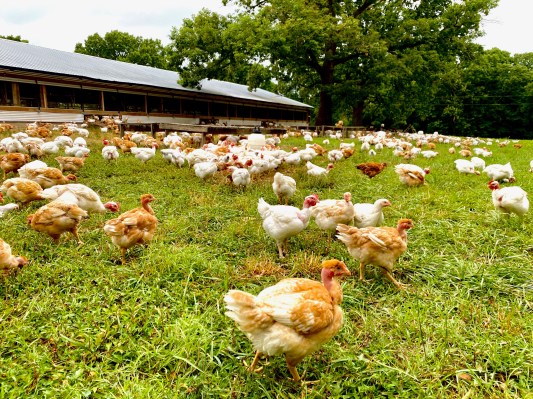 Chicken is the most consumed meat in the United States and the world. And yet, the system in place to breed and feed and raise all this chicken is incredibly detrimental to our overall wellbeing. It props up a conventional agricultural apparatus that focuses on corn and soy production, not to mention fosters a system where the vast majority of chicken available to consumers has been systemically inbred, lacking genetic diversity.

On a smaller scale, this can lead to bland tasting meat, but it also leaves the country’s supply of chicken open to being decimated by a virus.

Cooks Venture, founded by Blue Apron cofounder Matt Wadiak, is looking to dismantle the existing system, one step at a time. It starts with the chickens themselves.

Cooks Venture has done over a decade of research around chicken genetics to land on a proprietary pedigree line, the Pioneer, which is selectively bred to grow slower with a stronger immune system and much stronger gut health. It tastes better, too, according to Wadiak, but that’s not the only (or most important) benefit.

That strong gut health allows these chickens to be raised on one mix of feed for their whole life. Usually, your standard broiler chicken needs anywhere from three to five different mixes of feed, all blends of corn and soy, over the course of their life. This means that the transportation system gets a hell of a workout for each flock of chickens that is born.

Moreover, the Cooks Venture chicken can eat a much more diverse diet. This is important because it can incentivize the farmers who run 97 percent of America’s farmland to grow more than just soy and corn.

Cooks has its own farm to grow its feed and its own processing plant for the chickens it raises, partnering with a handful of retailers to sell its chickens to consumers (you can also buy one through the Cooks Venture website).

Over time, Cooks wants to license its IP around regenerative agriculture to farmers who grow chicken feed, contracting them out to grow more biodiverse crops and ultimately feed Cooks Venture chickens. On the other side of the revenue spectrum, Cooks sees the opportunity to work with companies or farmers interested in proliferating the Cooks Venture genetic lines.

Because these chickens can handle a more diverse diet, and are more heat resistant with stronger immune systems, Cooks could partner with farmers in areas with extreme heat or regions with food shortages.

Cooks today announced that it has secured $50 million in debt financing from PIUS, which insures the debt against a growing tech company’s intellectual property.

FWIW, we recently sat down with Wadiak to record an episode of the FOUND podcast. The episode will be released soon. Subscribe here to make sure you don’t miss it.