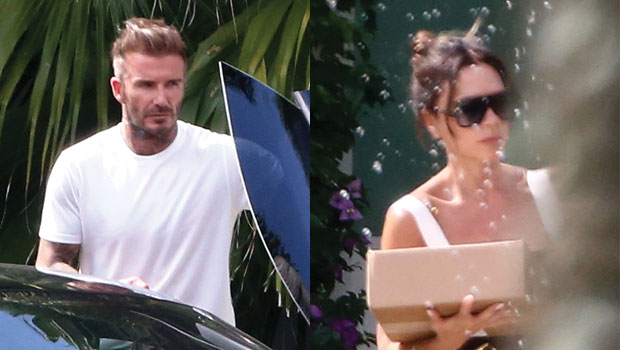 The famous parents of the young groom looked absolutely fabulous as they arrived in style ahead of the star-studded wedding.

David Beckham and Victoria Beckham are accustomed to being in the spotlight — but the attention takes on a whole new meaning when it’s for the wedding of your first-born child! The soccer star husband, 46, and former Spice Girl wife, 47, were spotted arriving to their son Brooklyn Beckham’s marriage to his fiancé Nicola Peltz in Florida on Friday (April 8). Looking fabulous as usual, the British A-list couple pulled up to Nicola’s family’s $76 million Palm Beach estate, where the star-studded nuptials will be taking place on Saturday (April 9).

David cut a casual, yet cool figure in a simple white tee and black pants, which draped over his box fresh pair of bright white sneakers. His hair was styled to perfection, while he showed off his sleeves of gorgeous tattoos on both arms. Victoria, meanwhile, proved worthy of her fashion icon status, as she arrived in style rocking a form-fitting black dress with chic white straps and a plunging back. Her trademark chestnut tresses were thrown up in a messy bun as she donned a pair of dark sunglasses. With minimal makeup, the mother of four let her natural beauty take center stage.

Brooklyn and Nicola’s wedding is going to be one for the ages! The marriage, which had been sidelined for a bit over Covid concerns, comes almost two years after the 23-year-old photographer asked the 27-year-old heiress/actress to be his wife. The proposal itself came after the pair were only dating for seven months! Brooklyn had shared the happy news to his Instagram in July 2020, posting a romantic snap of himself caressing Nicola, whose emerald-cut diamond ring was prominent on her ring finger. “Two weeks ago I asked my soulmate to marry me and she said yes. I am the luckiest man in the world,” Brooklyn announced in the caption. Nicola responded, “You’ve made me the luckiest girl in the world. I can’t wait to spend the rest of my life by your side. Your love is the most precious gift.”

The extravagant event is being held at the Peltz family’s incredible mansion in the tony seaside town, taking over 44,000 square feet near the pristine beach. The ceremony will reportedly be in the Jewish faith. “It’s strange, because the more wedding meetings that we have, the more real it feels,” Brooklyn told Vogue on Valentine’s Day. “I’m excited. I’m wearing a yarmulke. Yeah, Jewish wedding.”

As Brooklyn comes from a very famous lineage, the wedding guest list will undoubtedly be a who’s who in the world of the glitterati. And with Nicola the daughter of billionaire Nelson Peltz, their attendees are sure to be a rare breed as well. HollywoodLife will keep you posted to see which celebrities witness the union of the young stars.