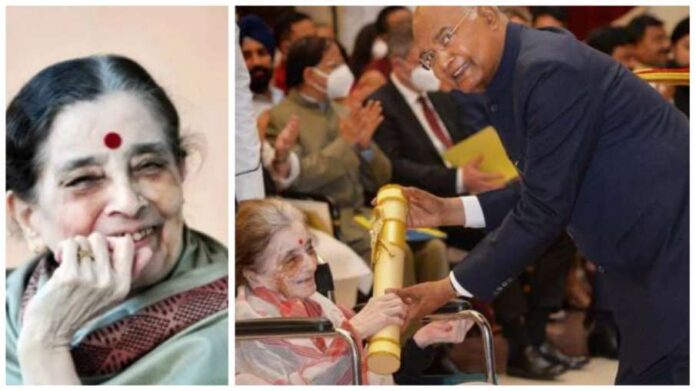 Lavani Queen Sulochana Chavan was the queen of Marathi music world. His voice had graced the songs of Marathi films from a time immemorial. But, now this voice has said goodbye to this world. Yes, Marathi singer ‘Lavani Queen’ Sulochana Chavan has said goodbye to this world at the age of 92. His son and dholki player Vijay Chavan told PTI that he breathed his last at his south Mumbai residence.

Popularly known as ‘Lavani Samardani’ i.e. Queen of Lavani, Sulochana Chavan was one of the most renowned singers in this traditional Maharashtrian music genre. She not only lent her voice to many songs in Marathi films, but was also associated with folk theater and the famous folk music and folk theater ‘Tamasha’ of Maharashtra.

Prime Minister Modi has also expressed his condolences on the death of ‘Lavani Samardani’. Prime Minister Narendra Modi tweeted in her memory and wrote, “Generations to come will remember Sulochana Tai Chavan for her important role in promoting the culture of Maharashtra, especially Lavani. He was also fond of music and theatre. I am saddened by his death. Condolences to his family and fans. peace.”

Let us inform that Maharashtra Chief Minister Eknath Shinde and Governor Bhagat Singh Koshyari have also condoled the death of Sulochana Tai. Chief Minister Shinde said in his condolence message that Chavan’s demise has created a void in the field of lavani, folk art and music. It is done.

Ghum Hai Kisikey Pyaar Meiin: Seeing the accident of Virat, Sai and Pakhi, the users got angry, said – how did this bus hang?

So, Governor Bhagat Singh Koshyari said that “Smt. Sulochana-tai Chavan was the undisputed queen of Lavani. She infused life into poetry and immortalized many Lavanis with the power of her unique voice and diction. May her beautiful voice live many more years.” I pay my tributes to the great singer and express my condolences to Mr. Vijay Chavan and other members of the bereaved family.”