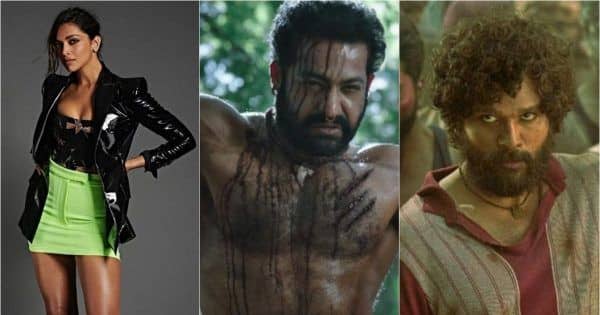 In the past couple of years, south films and south stars have turned out to be the game changers, especially during the Covid-19 crisis. While Bollywood films have suffered due to various lockdowns and pandemic norms, south film industry has been going strong despite restrictions. They are also appealing to the Hindi audience and the recent example is Allu Arjun and Rashmika Mandanna starrer Pushpa which has become the highest grossing film of 2021. Several south films are lined up for theatrical release catering to the pan-India audience. And it looks like Bollywood actress Deepika Padukone is also drawn to the south film industry. Also Read – Mithun Chakraborty says Allu Arjun’s blockbuster Pushpa is similar to his masala movies from 90s: ‘That is why people like it’

As Deepika is currently busy promoting her upcoming film Gehraiyaan, she was recently asked to name actors and directors she wants to work with. And RRR actor Jr NTR and Pushpa star Allu Arjun happen to be her top choices. “I would love to work with, and I hope this doesn’t create a riot or fight between whatever, but I would love to work with Jr NTR and Allu Arjun. I am obsessed with Jr NTR at this point, he has got an incredible personality. And Allu,” she told Bollywood Bubble. She added that she would like to work with Yeh Jawaani Hai Deewani director Ayan Mukerji again, she said that she would also like to work with Baahubali director SS Rajamouli, who is currently gearing up for RRR release. Also Read – Pushpa: This English cover of Allu Arjun’s Srivalli song by Dutch singer Emma Heesters will leave you stunned – watch video