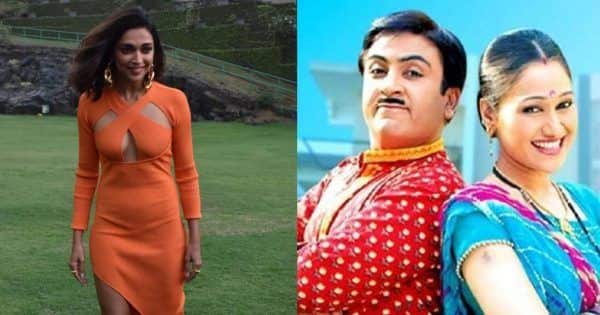 Deepika Padukone, Mohit Raina, Jim Sarbh, Danish Sait and others are among the top newsmakers of today from OTT. If you have had a busy day and want to know what happened in the world of entertainment, you are at the right place. Deepika Padukone’s epic reply on tiny clothes’ taunt, Taarak Mehta Ka Ooltah Chashmah shines on OTT, One Cut Two Cut: Danish Sait does a song for the first time Jim Sarbh opens up on the pressure while portraying Homi J. Bhabha and other such stories are a part of our trending OTT news. So read on to know more about our OTT newsmakers of the day. Also Read – Trending Entertainment News Today: Real reason behind Hrithik Roshan-Saba Azad’s dinner date; Urmila Matondkar on being written off as sex appeal and more

Deepika Padukone’s epic reply on tiny clothes’ taunt
Freddy Birdy had recently criticised Deepika Padukone for her clothes she wore for Gehraiyaan promotions. Now, Deepika shared a post on Instagram which read, “Scientists say, the Universe is made up of protons, neutrons, and electrons. They forgot to mention morons.” Also Read – From Deepika Padukone to Alia Bhatt – 9 B-town actresses whose wardrobe malfunctions grabbed headlines

Taarak Mehta Ka Ooltah Chashmah shines on OTT
Taarak Mehta Ka Ooltah Chashmah is one of the most popular shows on TV. It also did well on OTT last year. As per the recently released Amazon’s Fire TV streaming trends for 2021, Indian users asked Alexa to play the show once every minute. It made the show one the most searched TV show on Fire TV devices.

Jim Sarbh opens up on the pressure while portraying Homi J. Bhabha
Jim Sarbh will be very soon essaying the pioneer of the Indian nuclear programme, Homi J. Bhabha in the upcoming series Rocket Boys. Talking to IANS, he was asked if he ever felt the pressure while portraying such an eminent scientist, and he said, “I just tried to play my part and I had enough anxiety trying to just deliver the lines perfectly. Because they are usually complicated lines as they are full of technical and scientific jargon that the character would have known in the back of his head.”

One Cut Two Cut: Danish Sait does a song for the first time
In his first-ever romantic song, Danish Sait is seen wooing his co-star Samyukta, albeit in a dream sequence. Talking about the track, Danish said: “This is the first time that I’m doing a romantic song, so I’m really excited about this one. It is a really lovely song and I’m glad to be a part of it. Both Nakul and Benny have done their parts as music director and singer wonderfully.”

Mohit Raina: My choice of work reflects my upbringing
Actor Mohit Raina has shown his skills in every character he played in the recent past, be it that of a lawyer, an army officer, a doctor or a cop. In an interview to IANS he was asked if his family background reflects in his life choices. He replied, “I think everything that I do now somehow has a strong connection with my upbringing.” He added, “You know, when I started as a model and eventually gained visibility as an actor for playing mythological characters, people would say my Hindi is so pure. I studied in a government school in Jammu where our third language was Sanskrit. As a child, I used to feel so stupid to study Sanskrit because it was not even a spoken language! But when I was playing Mahadev, I realised the advantage.”