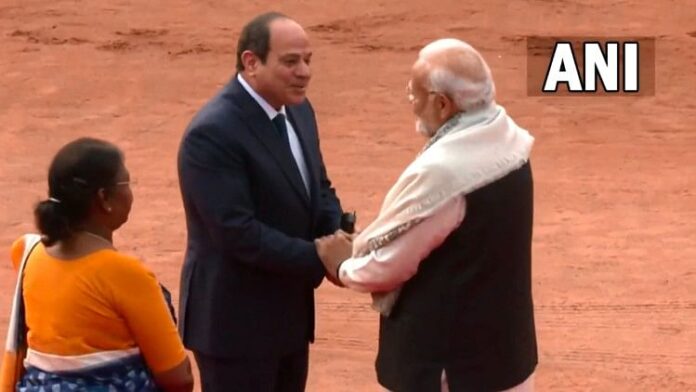 PM and President welcoming the President of Egypt
Photo: ANI

Egyptian President Abdel Fattah El Sisi arrived at Rashtrapati Bhavan today, where he was received with full state honours. He was received at Rashtrapati Bhavan by President Draupadi Murmu and Prime Minister Narendra Modi. Please tell that the President of Egypt will attend this Republic Day as the chief guest. Important talks are to be held between President Al Sisi and Prime Minister Narendra Modi today, in which many important issues including business, defense will be discussed.

Egyptian President will attend the #RepublicDayParade as the Chief Guest. pic.twitter.com/pcUMbSgXPU

Business between India and Egypt has picked up after the Corona epidemic. Trade between India and Egypt stood at $7.26 billion during the financial year 2021-22 and has seen a tremendous jump as compared to previous years. Bilateral trade between the two countries has been targeted to reach $12 billion by the financial year 2026-27. Egypt is also expanding the Suez Canal and India is also looking for investment opportunities in it. Today the President of Egypt will also have a meeting with Indian Foreign Minister S Jaishankar. Abdel Fattah al-Sisi reached New Delhi by a government flight at 6 pm on Tuesday.

Egyptian President Abdel Fattah El Sisi will attend the Republic Day Parade to be held on 26 January 2023 as the chief guest. A contingent of the Egyptian army will also take part in the parade.