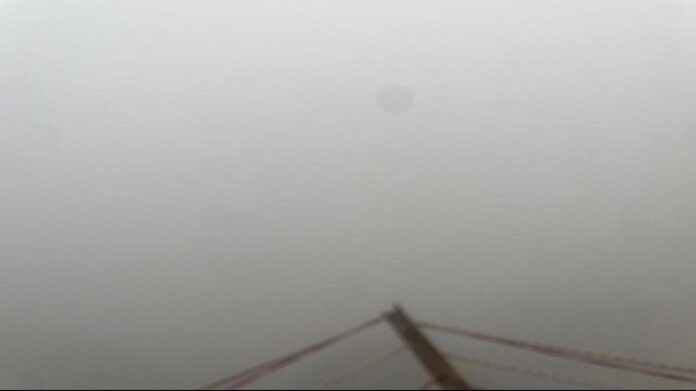 A road accident took place in the Dankaur area on the Yamuna Expressway in Greater Noida. Another car traveling in the wrong direction rammed into the Duster vehicle, seriously injuring four people.

Vehicles collided with each other at two different places near Sector 142 on the Noida-Greater Noida Expressway due to dense fog.

three flights diverted from delhi to jaipur due to low visibility

Due to low visibility in Delhi, three flights have been diverted towards Jaipur. These include Air India Express coming from Sharjah, SpiceJet coming from Ahmedabad and SpiceJet flights coming from Pune.

15 flights delayed due to weather

Whereas, 29 trains are running late in Northern Railway zone due to dense fog. Flights are affected due to severe fog and cold. Passengers at Delhi airport say that the visibility at the airport is very poor and the weather here is very cold. On the other hand, due to low visibility at Delhi’s Indira Gandhi International Airport, an Air India Express flight from Sharjah to Delhi has been diverted to Jaipur. Around 15 flights have been delayed due to bad weather. An official of Delhi airport has given this information.

The mercury will fall further, there will be dense fog

The Meteorological Department has said that there is no possibility of any significant change in the minimum temperature in most parts of East India during the next three days. In central India, the mercury may fall by two to three degrees in the next one or two days. Apart from this, there is a possibility of further increase in fog in Delhi-NCR, Uttar Pradesh, Rajasthan, Chandigarh, Punjab and Haryana. Same condition is going to live in Himachal Pradesh, Uttarakhand, West Bengal.

Poor visibility due to dense fog

No relief from cold wave for next two days

Monday morning was accompanied by dense fog. Cold wave is also wreaking havoc on the people. The forecast of the India Meteorological Department states that there will be no respite from the cold wave for the next two days.

Dense fog in Delhi this morning

Dense fog enveloped the country’s capital Delhi this morning. Visibility is very low due to fog. Flights are getting delayed due to fog. Along with this, 29 trains are running late in Northern Railway zone due to fog.

According to the India Meteorological Department (IMD), the visibility level dropped to zero meter in Bathinda and Agra and 25 meter in Patiala, Chandigarh, Hisar, Alwar, Pilani, Ganganagar, Lucknow and Coochbehar and Amritsar and Ludhiana, Ambala, Bhiwani, Visibility was 50 meters at Palam (Delhi), Fursatganj, Varanasi, Meerut, Gaya and Dhubri.

Around 25 flights were delayed in the morning due to fog

Around 335 trains were delayed due to fog yesterday morning. 88 have been cancelled, 31 diverted and 33 short terminated. Around 25 flights were delayed in the morning due to fog.

For the fourth consecutive day, the minimum temperature of Delhi remained less than the hilly areas.

Due to the icy wind blowing from the northwest directions, Delhi remained in the grip of severe cold wave on Sunday. Delhi recorded a minimum temperature of 1.9 degrees Celsius on Sunday, which is the lowest since 2021. According to the Meteorological Department, there is no hope of respite from the severe cold wave even on Monday.

Visibility was reduced to 25 meters in Safdarjung area and 50 meters in Palam. Noida is also in the lap of fog. The Meteorological Department says that there is no hope of relief today.

Delhi-NCR is under the grip of dense fog. The fog sheet has spread since late night. Along with this, there is also an attack of coolness. Visibility is very low in many areas of Delhi due to fog. The visibility in Ridge and Dhaula Kuan areas is so low that driving is becoming difficult.