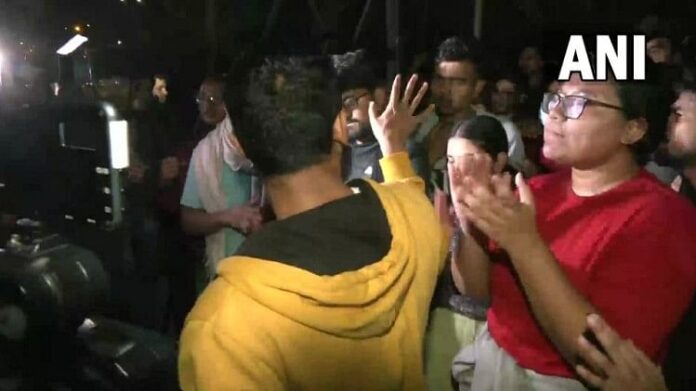 Ruckus is going on in JNU over the screening of controversial BBC documentary. The students’ protest continued till late night. A march started against the university administration in the campus and the police also arrived. Students belonging to Left organizations took out a protest march from JNU campus to Vasant Kunj police station. Allegations of stone pelting have also been made by student groups but there was no confirmation of stone pelting from the police. Students protested late night outside the police station in Vasant Kunj. After this, after the complaint given to the police by the JNU Students’ Union late in the night and the assurance of the police, the students ended their protest. Student leader Aishi gave this information.

JNU Students’ Union President Ayesha Ghosh says that ABVP has pelted stones but so far no action has been taken by the administration. We have almost completed the screening of the film. Our priority is to restore power. We will file an FIR. On the other hand, Gaurav Kumar, a student associated with ABVP regarding stone pelting, says that do these people making allegations have any evidence that we pelted stones? We have not pelted any stones. On the other hand, Delhi Police says that if we get any complaint from JNU then necessary action will be taken.

This time, even after the administration’s ban, a group of left-wing students created ruckus late Tuesday evening after watching the screening of the government-banned documentary ‘India: The Modi Question’ on mobile.

The students had asked to watch the documentary in the lawns of the Student Activity Center at 9 pm, but at 7:30 pm, due to a sudden technical fault, the entire campus lost power. After this, students started watching documentaries on laptops and mobiles in the light of mobile torches, sharing links with each other on mobiles at nine o’clock.

At the same time, the students allege that while watching the series, ABVP activists also pelted stones at them with their faces covered in the dark. He caught two of these students. On the notice of the JNU administration, the students wrote a reply asking three questions that they wanted to know what was it about this series, due to which the government had to ban it. During this, the police also reached the campus on information. Angered by this, the students also took out a protest march from the campus to Vasant Kunj.

That’s why the documentary was banned

The Central Government has banned the documentary prepared by the British Broadcasting Corporation (BBC) last week. It is based on the Gujarat riots. In this, there is an allegation of spreading false narratives through the series. For this reason, along with banning it in India, the government had issued orders to remove the tweets and videos of the documentary from YouTube. Apart from this, 50 links related to it have also been blocked.

When the police arrived, the angry attitude took out a protest march.

The university administration called the police after receiving information about Leftist students watching the documentary series despite the ban. This angered the students. Students took out a protest march from JNU campus to Vasant Kunj. During this, apart from the group watching the series, many leftist students also joined the march. During this, the students shouted slogans accusing the university administration of harassment and repressive action.

Earlier on Monday, a group of students at Jawaharlal Nehru University tried to screen the controversial BBC documentary on Prime Minister Narendra Modi on the evening of Tuesday, January 24, despite a warning given by the administration on Monday.