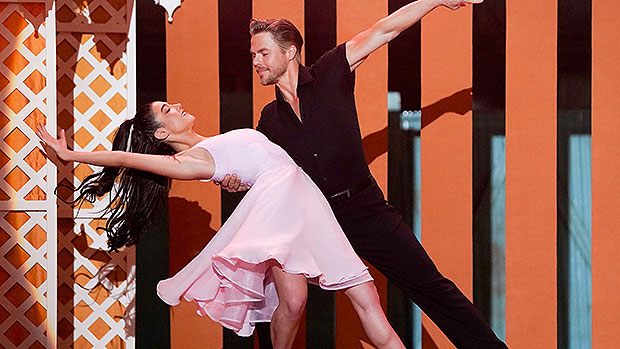 For the finale of the Step Into… the Movies special starring Derek Hough and Julianne Hough, the sibling duo tackled the legendary Dirty Dancing. Derek and Julianne enlisted TikTok star Charl D’Amelio for the “(I’ve Had) The Time of My Life” dance that everyone knows and loves from the end of Dirty Dancing.

Derek dressed in all black just like Patrick Swayze in the film, while Charli wore a pink dress similar to the one Jennifer Grey wore. They totally transform into Johnny and Baby! Derek and Charli danced together up on stage just like Johnny and Baby do, and they made dancing together look effortless.

Julianne joined in on the fun as a dancer in the audience. She soon ran up to the stage to dance along with Derek and Charli. All three moved together in sync perfectly.

Derek jumped off the stage like Johnny before turning around to await Charli. Derek and Charli recreated the amazing lift from the movie with ease. In yet another homage to the film, Julianne gave a watermelon to Kenny Ortega, who was sitting in the audience. Kenny was the choreographer for the 1987 film.

Charli got her own solo moment as well. She danced up on a table alongside fellow dancers. Julianne and Derek finished the dance together after an incredible one hour of tributes to the greatest dances in the movies.

HollywoodLife spoke EXCLUSIVELY with Derek ahead of the special about the world seeing a different side to Charli’s dancing skills. “I’m really excited for people to see Charli D’Amelio because they know her from TikTok, but they haven’t seen this type of dancing from her,” he said.

Throughout Derek and Julianne’s Step Into… the Movies special, the siblings honored films like Chicago, Saturday Night Fever, Beauty and the Beast, and more. Derek and Julianne paid tribute to the beloved dances but also put their own unique spin on the performances. They were joined by special guests Ariana DeBose, Harry Shum Jr., and more.