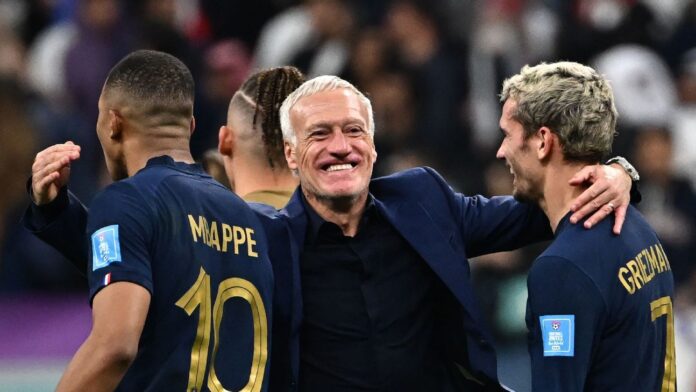 France Coach Didier Deschamps admitted his team was “a bit lucky” to lose England in their World Cup quarter-final at the Al Bayt Stadium in Qatar on Saturday.

But lucky or not, defending champions France rode a Olivier Giroud saw the winner and the captain of England harry kane miss a late penalty to seal a 2-1 win and secure a place in the semi-finals against Morocco on Wednesday.

“It’s fantastic, it was a big game,” said Deschamps. “We played a great England team who are technically and physically strong.

“It’s fantastic for the players to be in the last four again. In these moments you wish time would stop for a while.”

“But tonight we’re going to enjoy it. We got a little lucky though, we gave away two penalties. We kept our lead with our heart and our guts.”

Kane equalized with a penalty in the 54th minute aurelian tchoumeniopener for France, but Tottenham Hotspur Starr missed a second penalty after half an hour and curled his effort over the bar.

Giroud, who overtook Thierry Henry to become France’s all-time top goal scorer earlier in the tournament, said les blues Will have to give our best to beat England.

“This goal tonight, the 53rd, is even better [than equalling Henry], Before I had the chance I should have hit harder and scored,” Giroud said. “I thought I might get another chance, and when it came to me it was an incredible opportunity to score. There was emotion.

“You need to keep the faith. [Antoine Griezmann] Gave me a super ball, it’s great for the team, it’s awesome.

“We knew the potential of this young England team. They have everything, but we played a solid game, we tried to hurt them on the break. We went for it with all our mental strength.”

Deschamps said, “We will prepare well for the next game. Morocco deserves praise.” “Maybe they weren’t here expecting [in the last four]But he only conceded one goal and then, not at all surprised to see him here.”