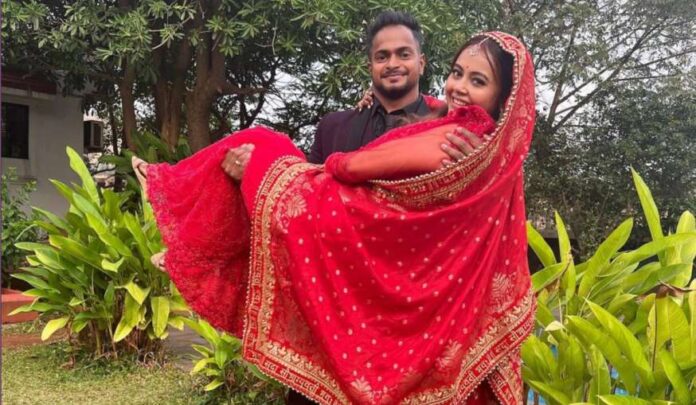 ‘Saath Nibhana Saathiya’ actress Devoleena Bhattacharjee is in headlines for her secret wedding. On Tuesday, the actress shared pictures of turmeric ceremony on December 13 and mehndi on December 14 on social media on her Instagram account. Seeing the pictures of the actress with Vishal Singh, the question arose in many people’s mind whether the marriage of the actress is a promotion or Gopi Bahu has really got married. Devoleena shared many pictures of herself in the wedding couple on her Instagram. After seeing these pictures of her, her fans and users were just curious to know with whom Devoleena has finally married. Now all these secrets have been exposed because Devoleena herself has shared romantic pictures on Instagram after her marriage with her husband.

Devoleena’s partner is none other than Shahnawaz Sheikh. Shahnawaz Sheikh is a gym trainer by profession. During ‘Bigg Boss 13’, Devoleena Bhattacharjee mentioned that she is dating someone outside the house. The couple dated each other for about two years. Devoleena and Vishal Singh both are good friends. Seeing their bond, it seemed that they are dating. However, he made it clear many times that there is only friendship between them.

In the first picture, where the actress is sitting on a chair and lovingly looking at her husband, in the second picture, her husband is posing romantically with her. In the second picture, Devoleena’s husband is carrying her in his lap. Sharing these pictures, Devoleena wrote in the caption, ‘I can proudly say that I have said yes to you. Even if I had searched with a lamp, I would not have found someone like you. You are the answer to my pain and prayers. I love you Shonu. Lots of love to all of you, keep on giving us your blessings like this. The mysterious and famous brother-in-law of all of you.

James Cameron didn’t attend the premiere of ‘Avatar: The Way of Water’ because of this!

Anupamaa: Pakhi will try to get love with the help of lies, there will be a stir in more lives