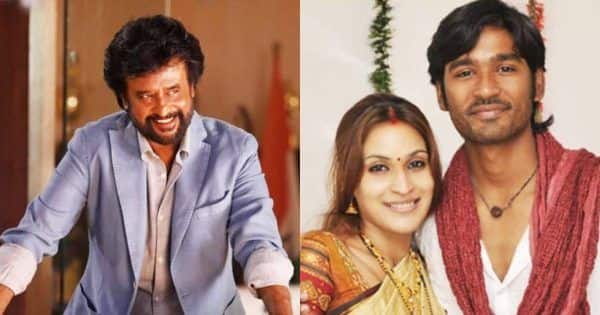 Dhanush and Aishwaryaa Rajinikanth earlier announced their separation as husband and wife in similarly worded official statement that read: “18 years of togetherness as friends, couple as parents and well-wishers to each other The journey has been the growth, understanding, adjusting and adapting… Today we stand at a place were our paths separate… Dhanush and I have decided to part ways as a couple and take time to understand us as individuals for the better. Please do respect our decision and give us the needed privacy to deal with this.” Check out the tweet below: Also Read – Dhanush and Aishwaryaa divorce: Throwback post of Rajinikanth’s daughter on institution of marriage goes viral; her words echo her current turmoil

Now, a throwback video has surfaced where Rajinikanth can be seen waxing lyrical on his son-in-law at an event for his movie, Kaala, directed by Pa. Ranjith, where he can be heard saying, “I’m not just saying this because Dhanush is my son-in-law. But, he’s a golden boy. He worships his parents, he takes good care of his wife, he’s a good father and a good son-in-law. And he’s very talented.” We hope that Rajini and Dhanush maintian the same equation with each other even after recent events. Watch the video below: Also Read – Dhanush-Aishwaryaa Rajinikanth divorce: Former’s brother and ace director Selvaraghavan knew since months – view cryptic tweets

Reports are also emerging that suggest Dhanush’s brother and ace Director Selvaraghavan already knew about his brother’s divorce from Aishwaryaa Rajinikanth since several months, and was also posting cryptic tweets on the same during this time. In fact, his tweets were making Dhanush fans raise questions about the actor’s marital life, but those were only followed with more philosophical or cryptic tweets. Here are some of them… Also Read – Dhanush-Aishwaryaa Rajnikanth divorce: Did work come in between their marriage; here’s the complete truth!

Explains why dhanush was spending his time with him and his sister during Aishwarya’s bday. Still hope this wasn’t the case. And they find themselves, their happiness. 🙂 https://t.co/Qe3Ne6yKiP

It’s also being said that Selvaraghavan has been deeply disturbed and under a lot of stress due to his brother’s divorce from Aishwaryaa Rajinikanth, and keeping the secret about their impending separation all this while may have even affected his mental health.