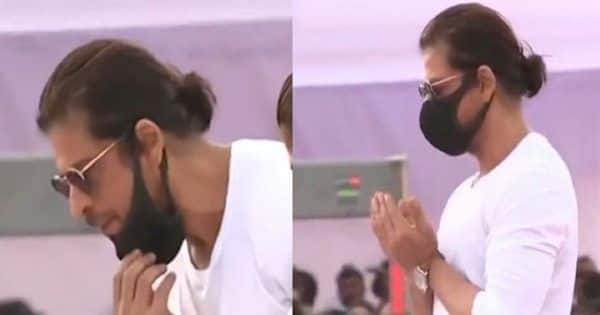 Shah Rukh Khan making a dua at Lata Mangeshkar‘s funeral video is going VIRAL. While he blew the air to ward off the evil after finishing the dua which is a common practice in Islam, many netizens felt that the actor spits on Lata Didi’s mortal remains. However that isn’t the truth, if you see the video carefully, the superstar is blowing the air to ward off the evil spirit and not spitting. While there is a huge debate whether SRK spits on Lata Mangeshkar’s mortal remains. The netizens are even sharing video clips from Shah Rukh Khan’s film My Name is Khan where he is seen performing the same dua for his and Kajol‘s son in the film. Also Read – Ankita Lokhande BRUTALLY trolled for posting a video on Bijlee Bijlee on day of Lata Mangeshkar’s demise

Have a look at how netizens are defending their superstar. Also Read – Asha Bhosle shares childhood picture with her late sister Lata Mangeshkar on Instagram; dedicates her song ‘Bachpan Ke Din’

Srk did not spit, he blew to ward off evil for Lataji as per his religion & if people read more like I did, they would understand. As for can Hindus pray at funeral of someone from a Muslim faith, then the answer is Yes.
Because, I have & no one had a problem with it.
???

Fringe targetting @iamsrk by falsely accusing him of spitting at #LataMangeshkar Ji’s funeral should be ashamed of themselves. He prayed & blew on her mortal remains for protection & blessings in her onward journey. Such communal filth has no place in a country like ours ???? pic.twitter.com/xLcaQPu1g8

SRK didn’t spit there. He blew, which is a common practice in Islam. Muslims do blow air from their mouth after reciting Ayats from Holy Quran.

RWs are making issue out of nothing that too in the death of an eminent personality. #LataMangeshkar#ShivajiPark#ShahRukhKhan

Shah Rukh Khan reading a dua and blowing on Lata ji’s mortal remains for protection and blessings in the next life. Cannot comprehend the level of bitterness of those saying he is spitting. pic.twitter.com/JkCTcesl86