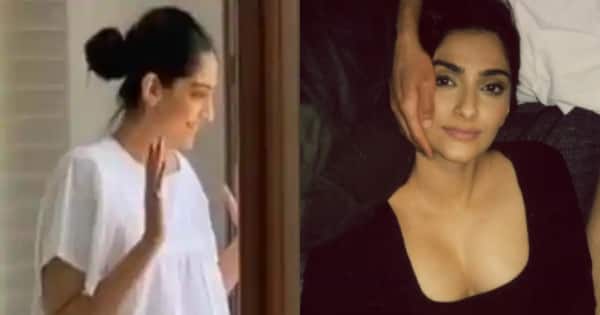 Ever since Sonam Kapoor took to her social media to share the pictures of her and Anand Ahuja, tongues have started wagging. The actress flaunted her baby bump while sharing the BIG GOOD NEWS with fans about her pregnancy. The actress also shared the tentative period when her first baby is all set to arrive. Soon after the post, many celebrities from Bollywood started congratulating the couple. These included the likes of Kareena Kapoor Khan, Dia Mirza, Varun Dhawan, Ekta Kapoor, Samantha Ruth Prabhu, Malaika Arora and many more. However, there are also fans who have been speculating about Sonam Kapoor ‘lying’ to the media on recent occasions when there were speculations about her being pregnant. So what is the truth? Was Sonam Kapoor pregnant when her oversized clothes left fans and media wondering? Did she lie about her pregnancy and hid from the world? We tell you the truth. Also Read – Sonam Kapoor, Kajal Aggarwal and more: List of divas who are set to embrace motherhood in 2022 [VIEW PICS]

Sonam Kapoor had maintained on several occasions that she will let everyone know when there is indeed a good news. The Neerja actress kept her word and announced that she and Anand Ahuja are expecting their first child along with when it is due. She mentioned in her post that the baby is expected to arrive in Fall 2022, which means the months between September-November. Also Read – Sonam Kapoor flaunts baby bump as she and Anand Ahuja announce pregnancy; enthused Kareena Kapoor Khan reacts

This has also made it clear that the actress is in her 4th month of pregnancy. To jog your memory, the pregnancy rumours, when she was spotted at the airport in an oversized outfit, had begun around July last year. So all those who are wondering with Sonam lied earlier, when she had said she is not pregnant or that she hid the truth, now you know it. Also Read – Before The Kashmir Files, check out movies starring Ajay Devgn, Akshay Kumar, Aamir Khan and more that received government support