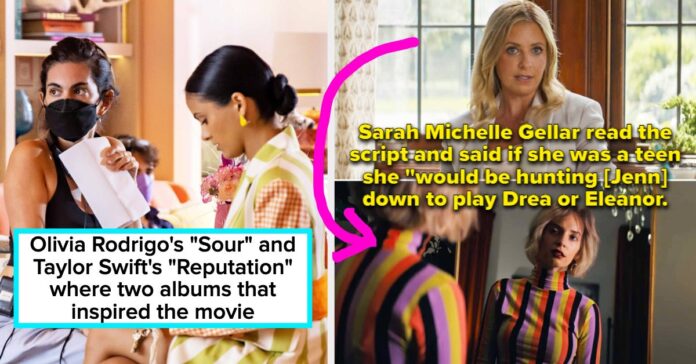 NOW: The soundtrack and music in Do Revenge are amazing and make the movie feel like a throwback to the classic ’90s teen movies everyone loves. How was it choosing the music for the film?

So, Este [Haim] and Amanda [Yamate] scored the film, and working with them was awesome. We needed something that felt like it could live within all of the needle drops, which there are many. That baseline, that awesome Drea and Eleanor-themed baseline, it’s so good. Having an Este Haim baseline in your film as the score? Like, iconic.

On the soundtrack side, I worked with Rob Lowry, who’s our music supervisor, and it was amazing. I remember growing up and going to like Barnes & Noble or Best Buy and buying the CDs of the soundtracks to iconic teen movies, and I wanted that feeling. I wanted the feeling of, like, ripping off the plastic of a CD and devouring every song. I wanted Do Revenge to feel like that.

Having Muna and Billie Eilish on one film soundtrack is pretty remarkable. You nailed it.