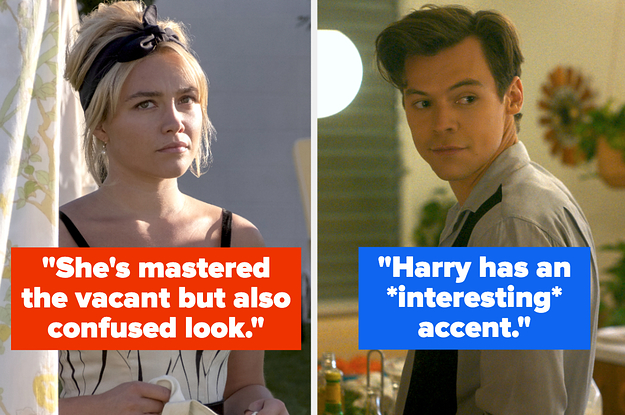 8. It does kind of feel like they’re about to break into song Hairspray style.

9. Do the women never go beyond their driveways? How do they get food? Do groceries magically appear in their cupboards?

10. NGL, those Victory signs are literally a massive red flag.

11. Now they’re doing these forced ballet lessons. We don’t know that they’re forced. but every woman we’ve met thus far is doing them so…

12. So it’s cooking, cleaning, and ballet for the women, is it? Alright then.

13. Random thought, but it feels a little unusual to have so many Brits in a blockbuster film like this, no? You’ve got Florence, Harry, Gemma Chan.

14. So there’s a new woman on the block and she looks absolutely terrified. She definitely doesn’t want to be there.

15. Florence keeps noticing weird things and having hallucinations. We’re not that far in, so this film is already getting straight into the whole this-place-isn’t-what-it-seems vibes.

16. Did someone watch Florence tripping out in Midsommar and think. “yep, that worked, let’s do that again.”

17. How did Florence even end up here?!? I guess that’s the main question really.