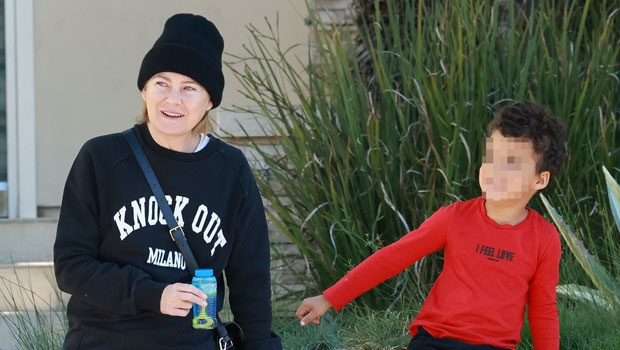 Ellen Pompeo and her son Eli Ivery spent some adorable mother-and-son time together by blowing bubbles in front of an LA storefront.

Ellen Pompeo, 52, spent a lovely Saturday afternoon with her five-year-old son Eli Ivery on Feb. 21. The Grey’s Anatomy star was spotted sitting on the ledge of an LA storefront with her son as they blew bubbles. The actress kept it casual with a black beanie, black long-sleeved shirt and grey sweatpants. Eli beamed next to her as he wore a red long-sleeved shirt, black pants and sweet red and black sneakers.

At one point, they got up to chase some of the bubbles they were blowing. It’s clear the mother and son duo share a close bond based on how much fun they were having. The actress shares Eli with her husband Chris Ivery. They also have two older daughters, Stella Ivery, 12, and Sienna, 7, and Ellen makes sure to get in plenty of quality time with them too.

She recently took her two daughters on a shopping trip. They went to the magical land of Target to pick up a few, or more, things. Mom and older sister Stella kept it casual in jeans and sneakers while Sienna got glammed up for the occasion and rocked a pink glittery dress and coat. All three also donned face masks as COVID cases were on the rise at that point.

When Ellen isn’t spending time with her family, she’s working on a very popular TV series called Grey’s Anatomy. News recently broke that the hit ABC series was renewed for Season 19. There was speculation as to whether Ellen, the series’ leading lady, would return. It looks like she’ll be back with “another salary increase and remains broadcast television’s highest-earning actress in a primetime drama series,” as per THR.

Ironically, Ellen has been the one advocating the show should end. After the release of Season 18, she felt it was time to wrap it up. “I’ve been trying to focus on convincing everybody that it should end,” she told Insider. “​I feel like I’m the super naive one who keeps saying, ‘But what’s the story going to be, what story are we going to tell?’” But as Ellen knows, the show’s still a big hit and so the show must go on!