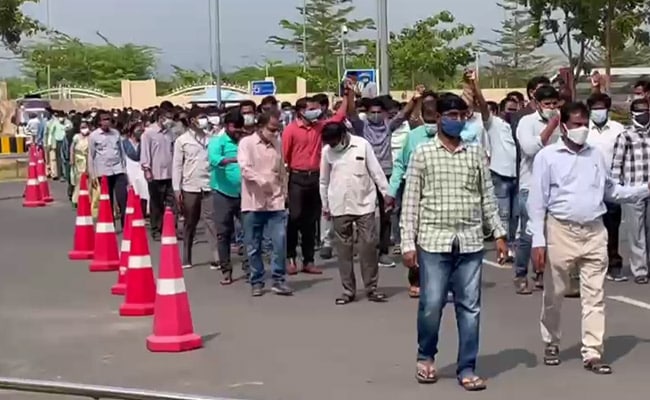 The government also agreed to have the state’s own Pay Revision Commission every five years.

Marathon talks between agitating employees and Andhra Pradesh government ended on a fruitful note late Saturday night, following which the former withdrew their call for an indefinite strike.

Thousands of Andhra Pradesh government employees and teachers had marched on the streets of Vijayawada city on Thursday, in protest against the recent pay revision. They had threatened to launch an indefinite strike from Sunday midnight.

The government conceded to the employees’ demands and agreed to enhance certain benefits, including the house rent allowance (HRA), and also to undertake pay revision every five years.

The government committee comprising ministers and others was engaged in talks with the Pay Revision Commission Struggle Committee for over seven hours on Saturday, a follow-up to the seven-hour talks late Friday night.

The government said there would be no change in the 23 per cent fitment announced last month. Also, there would be no immediate adjustment of the interim relief dues for the period July 1, 2019 to March 30, 2020.

The amount would be adjusted in the retirement benefits of the employees.

Addressing a press conference at the end of the talks, government advisor (public affairs) SRK Reddy said the talks with the employees’ leaders ended on a fruitful note as the government agreed to revise the HRA slabs as per the population (of a location).

Government employees in all the district headquarters would now get a 16 per cent HRA. State Secretariat and Heads of Departments staff, who relocated from Hyderabad after the state bifurcation, would get a 24 per cent HRA till June 2024. This is, however, six per cent less than what they have been getting so far.

The City Compensatory Allowance that was abolished as per the January 17 pay revision orders would now be restored.

The government also agreed to have the state’s own Pay Revision Commission every five years, in tune with the employees’ demand.

The government had earlier said it would do away with the PRC and adopt the Central Pay Commission recommendations once in 10 years, a move stoutly opposed by the employees.