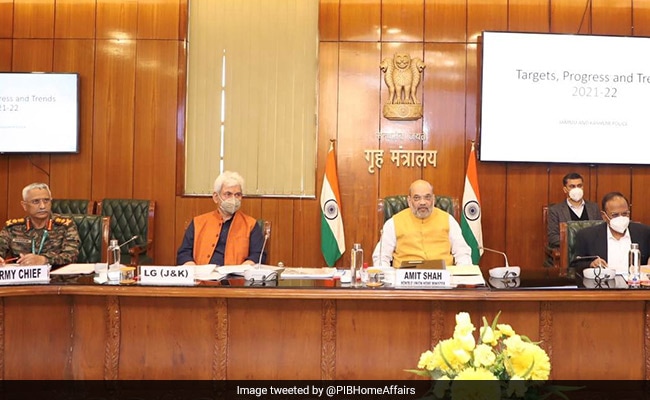 A year of ceasefire between India and Pakistan was also discussed.

Tighten the security along the Line Of Control to ensure zero cross-border infiltration, Home Minister Amit Shah stressed at a high-level security review meeting in Delhi on Friday.

“Challenges posed by drones, tunnels, soft target killings and attempts to disrupt investment and normalcy was discussed in the meeting,” a senior MHA official told NDTV.

“It was a regular review regarding law-and-order situation in Jammu and Kashmir. Discussions were also done as to how to move forward,” L-G Manoj Sinha told NDTV.

“It’s almost a year now but attempts to continuously destabilise the area are being made so each agency have their assessments,” said another officer.

Security forces in Kashmir say they have been able to neutralise as many as 25 terrorists in January alone.

“Eight foreign terrorists and 17 local terrorists were neutralised during various operations,” said an official involved in these operations.

However, agencies are trying to find out whether these terrorists were fresh infiltrations or were operating for long in valley.