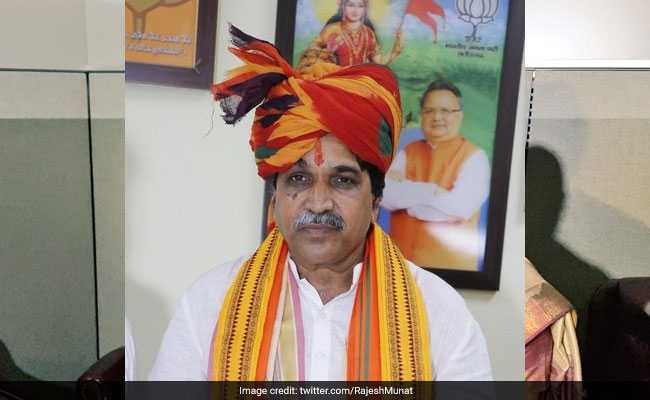 Rajesh Munat and three dozen BJP workers were later at a sit-in protest at the police station.

Senior BJP leader and former Chhattisgarh minister Rajesh Munat on Saturday alleged that he was manhandled by police personnel inside a police station in Raipur.

He and over three dozen BJP workers later sat on a sit-in protest in the premises of the police station demanding appropriate action into the matter.

The Vidhan Sabha police station witnessed chaos and high drama for around four hours after Mr Munat and BJP workers were brought there by police under preventive measures.

It all started in the afternoon when some BJP workers allegedly thrashed four persons clad in black clothes under the Ganj police station area on suspicion that they were Congress workers who are trying to stage a protest opposing the function of Union Civil Aviation Minister Jyotiraditya Scindia in a hotel there.

“The persons who were assaulted are natives of state’s Mungeli district and they had come here to meet minister Guru Rudra Kumar to raise grievances of their respective areas. When they came out of the minister’s bungalow located near the venue of Scindia’s function here they were allegedly attacked by BJP workers”, said a senior police officer.

The victims were wearing black clothes and BJP workers thought that they might have come there to protest against Scindia’s visit, he said.

On being alerted about it, police reached the spot and detained BJP workers while Mr Munat forcibly accompanied them in the police van, he said.

Some videos being circulated on social media showed that Mr Munat was engaged in a heated exchange with police personnel and was allegedly using abusive language.

The detained BJP leaders and workers were then taken to the Vidhan Sabha police station in a police van.

Mr Munat later released a video alleging that he was manhandled inside the police station.

He claimed that the entire incident was a well-planned conspiracy at the behest of the ruling Congress government.

The BJP has accused Congress of misusing the power to suppress the opposition.

Reacting to the incident, Vishnudeo Sai said that the people of Chhattisgarh will give a befitting reply to the Bhupesh Baghel government.

“There is a jungle raj (misrule) in the state and the values of democracy are being murdered by misusing the police. This atrocity of the Baghel government would lead to its decline,” he alleged.

He also said that a BJP delegation will meet state Governor Anusuiya Uikey on Sunday.

Police said they have received a complaint from the four persons allegedly thrashed by BJP workers and an investigation is underway.