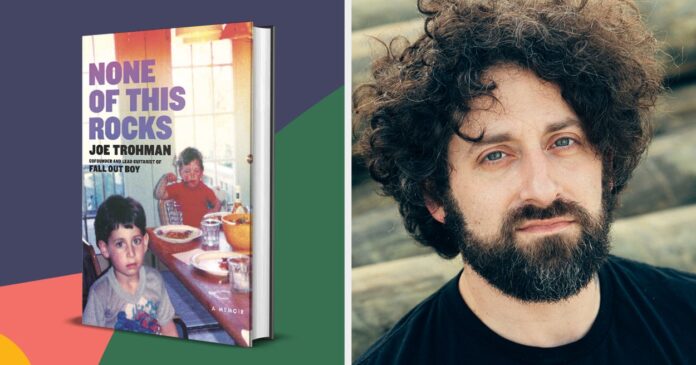 FP: That’s incredible. Nothing like someone telling you, “You can’t do it!” to make you want to prove them wrong!

The book is fantastic, first of all. I was actually telling a friend about it, how it’s called None of This Rocks, and she said, “Man, that’s a great title!” And it is! Did you come up with it?

JT: Well, thank you very much. Means a great deal!

It is my title. I assumed the publisher would want to change it, but they obviously liked it as well. It all came from the fact that I don’t feel like a “rockstar.” That word both makes me gag. It is better suited for an abhorrent energy drink or to be used by a guy in an Affliction shirt at a topless bar. I’m just a dorky dad with bad tattoos. I definitely do not rock. And the book itself is the antithesis to a rock ‘n roll memoir. It’s not chock full of stories about snorting meth off an exposed boob on a recording console. It’s mostly about my screwed-up brain, which also doesn’t “rock.”

FP: That was a surprise to me upon reading this, because so many people see you — and the band — in this very specific, successful way due to having such a remarkable career, so it’s assumed that a certain type of “rockstar” lifestyle follows this kind of image. And this book isn’t just about your career with Fall Out Boy, but also your childhood, your complicated relationship with your mother, anti-Semitism you experienced moving from place to place — did anything about writing your story surprise you once you began?

JT: Yeah, the perception about us is different than the reality. Lots of assumptions. We’re pretty low-key guys and don’t actively participate in classic “rockstar” antics.

What surprised me most is how easy it was to tap into these memories and unpack them. I thought my brain was mainly full of reruns of M*A*S*H*, Simpsons quotes, and inane facts about minor Star Wars characters. Apparently, I had a deluge of real things behind my brain dam that I was more ready to explore than I had realized.

FP: Your writing is very honest. It felt like catching up with an old friend. Did you have support from your family throughout the process? You mention consulting Pete [Wentz] at one point in the book — was the band supportive?

JT: That’s incredibly cool of you to say. It was important for me that this book feel relatable.

The family I have left is very supportive — my wife, my dad, even my kids are very active in their excitement regarding the things I do/make.

The band is always behind the things I do outside the group. We all try to back each other up on “extracurriculars,” so to speak. And with this, they trusted the book was not to be some gross exposé on the inner workings of Fall Out Boy. Sure, I talk about the band, it’s part of my life, I’ve been doing it since age 17. But they knew it was going to be a me-centric thing. I even shared an early manuscript with them. Lots of 👍 emojis. High praise these days!

FP: Love to hear that! There were so many ways in which it resonated with me, and I know it’ll also resonate with many others too.

It seems like you’re as close as brothers in the way you write about your relationship with them. You talk about being the “glue guy” — the one who brought everyone together and helped keep the momentum going. Do you feel like you had something special with Andy, Pete, and Patrick in those very early days?

JT: I still think we do, otherwise we wouldn’t be around or even remotely relevant. But it felt clear to me in those early days that Pete, Patrick, and I had something special, even if that something special wasn’t fully tangible at the beginning. Because do not doubt it for a second: we sucked. Awful. Lots of reasons to break up. But still, something was there. I knew it. And once we were able to wrangle Andy into the fold, a REAL drummer, that “special” materialized in the music. And that brought us even closer together.

FP: You don’t shy away from discussing the highs and lows of your career trajectory in a way that’s reflective and self-aware, even going on to mention the album you believed just wasn’t good. You also write honestly about mental health and therapy, which I think is so important to read about and discuss in general. Was this a challenge to write, or was it more therapeutic?

JT: Yeah, I am not good at holding back, haha. I suppose if the worst thing I have to say about my band is that I didn’t enjoy the making and release of one album, then I didn’t really go that hard.

But, regarding the honesty surrounding my depression, my anxiety, my mood disorder — it was both a challenge and therapy. The challenge was finding the words to describe certain ethereal chemically based feelings and experiences that I had yet to verbalize. But once I found those words, the expression worked as a release to a pressure valve. I mentioned approaching this book like journaling, which people always say is good for the ol’ bad brain. And this sort of worked like that. Plus, there’s the notion, the inkling of a thought that maybe, just maybe, sharing what’s happening inside my mind will make others with equally complicated brains feel less alone in the world.

FP: I do truly and whole-heartedly think you accomplish that. At least, those were my feelings after reading. A lot of the time, it is hard to verbalize, and I really appreciated your candor. Also, your sense of humor is so great, and your voice in particular shines. Is there a specific section that was your favorite to write?

JT: Well, thanks! I suppose two decades of being a mental patient has helped me to better find the words for strange, confusing, thoughts. Ain’t therapy grand?

I have two sections I enjoyed writing most: when my mom willingly left me with hundreds of strange Orthodox Jewish men to dance around an Optimus Prime-sized Star of David. And then there was the chapter regarding trying to befriend my anti-Semitic bully, leading to a near arrest for lifting Swisher Sweet cigars. Those are two different, albeit fucked-up, memories that I thought were so stupid. They were easy for me to laugh about. I don’t know why. I suppose because, with the former, my mom was out of her mind. And with the latter, because I was out of my own.

FP: Two very different memories for sure. I can see why both stuck with you! Is there anything you wanted to include in the book that ended up on the cutting room floor?

JT: I went pretty ham on what I had wanted in this book. The closest thing to a “cutting room” floor chapter would be the one about cutting (pun intended) into my back and getting my most recent back surgery, which led to a full-on, Cuckoo’s Nest mental breakdown. I wrote it on my own, didn’t tell my editor. I figured we were done by that point. Then he suggested needing something more, something relating to behind-the-scenes interactions and feelings regarding my relationship to the band. So, I presented him with that chapter and he was thrilled. That almost didn’t make it.

Otherwise, I think I’ve cleared so many stories from my mind. Now I can think about a million other unearthed moments from my past. Maybe I’ll write another sad boy book if people read this one.

FP: You’ve had such a healing journey in so many different ways. It was also intriguing to read about your start before Fall Out Boy and how you came to love the guitar. You mention that the current music landscape seems to have an aversion to guitars, but do you think that’s changing or due to change?

JT: I think it’s changing somewhat. My oldest daughter loves Olivia Rodrigo. Her big hit is super guitar driven. Like it or not, Machine Gun Kelly made a relatively big guitar record. It may not be my thing, but it’s all guitar. That’s exciting. Even hardcore bands like Turnstile are breaking through the noise a little, crossing over somewhat. There still isn’t a big guitar presence on what constitutes for pop radio these days, but maybe that doesn’t matter? Seems like TikTok is the arbiter of pop culture these days. So here’s hoping for more guitar-driven stuff hitting big with the youths on the app I may officially be too old to use and understand.