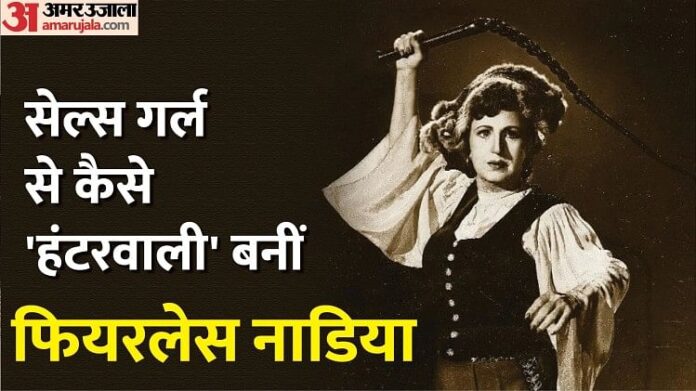 Who does not like to see stars in action avatar on the big screen. From fighting with villains to stunting with vehicles or jumping into fire, stars have been seen doing all kinds of action in films. Now where heroines themselves are seen doing action in films, there was a time when she used to run away from it. At the same time, in the era of 1930-40, there was such an actress who never backed down from action scenes. Without a harness, she would jump from heights, swing from chandeliers, play with fire, and sometimes clash with men on top of a moving train. The name of this actress was Nadia, who was known as ‘Fearless Nadia’.

Came to Bombay after father’s posting


Nadia’s real name was Mary Ann Evans, who surprised everyone with her stint in films. Born in Perth Australia on January 8, 1908, Nadia said goodbye to this world on January 9, a day after her birthday in 1996. Nadia’s father was Scottish and volunteered in the British Army. Whereas, his mother was Greek. When Nadia was one year old, her father was transferred to Bombay (Mumbai), when she came here for the first time. After this, her father died in the First World War and she went professional with the family.


In the North-West Frontier Province (now Khyber Pakhtunkhwa in Pakistan), Nadia learned gun shooting, hunting, fishing and horse riding. Nadia had no idea at that time what she was going to do in the future. But still she used to work hard to make her body strong and this later helped her the most. Then suddenly something happened that he had to come back to Mumbai with his family. Here she used to work as a sales girl at the Army and Navy Store in Bombay. Nadia aspired to be a singer since childhood, but fate had other plans and she joined Russian dancer Madame Astrova’s group, which used to perform at the gatherings of the royal families of India.

This is how Mary became Nadia


Mary Ann Evans received the name Nadia while in Madame Astrova’s group. In fact, Armenian astrology had told him that success awaited him, so he would have to keep his name from ‘N’. After this, he chose the name Nadia because it was easily understood by Indians and sounded cool too. The astrologer’s prediction came true and later Nadia became very famous. However, after appearing in films, some people advised her to change her name to Nanda Devi. But Nadia flatly denied it. At the same time, while living in the group, she became adept at acrobatics stunts.

B-Town: Apart from Kiara-Siddharth, shehnai can also be played at the house of these celebs this year, wedding preparations are going on


After this, the owner of a cinema hall in Lahore caught sight of Nadia and told Wadia Brothers about Nadia. When Nadia reached the Wadia brothers’ studio, they were surprised to see her western face. After this, he initially gave small roles to Nadia, for which he used to get Rs 60 per month. After this came the film ‘Hunterwali’, which made Nadia a star. Seeing Nadia in the film, there was a stir everywhere. Everyone was amazed to see him riding a horse and fighting with men. Her fearlessness became a trademark and she became ‘Fearless Nadia’ from Nadia.