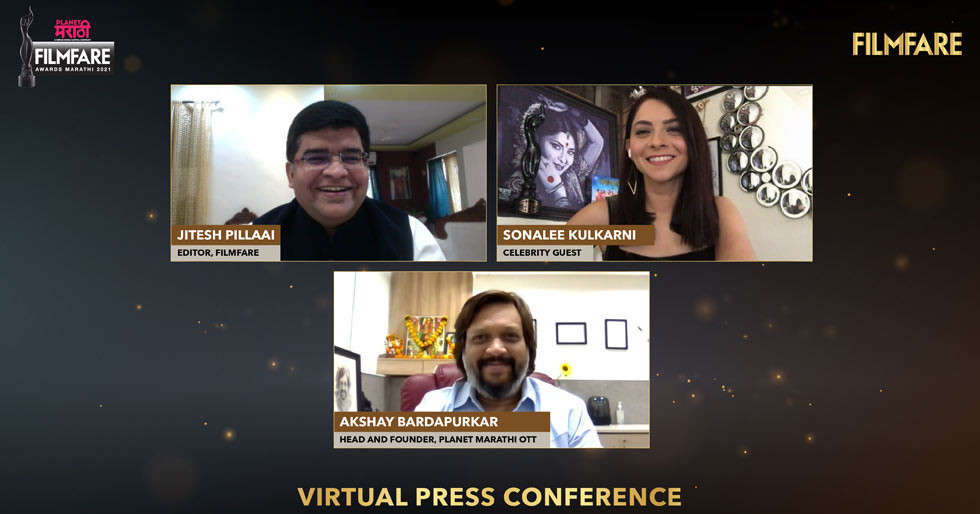 Celebrating the finest performances from the Marathi Film Industry, Filmfare is all set to host the 6th edition of the Filmfare Awards Marathi on 31st March 2022 in association with Planet Marathi as title partner. This year’s show will be held at St. Andrew’s Auditorium, Bandra, Mumbai and will bring double the excitement and celebrations as it will honour Marathi Films released between 2020-2021. The star-studded ceremony will once again loud the cinematic excellence displayed by one of India’s oldest film industries.

The celebration will witness the biggest and most-talented names from the Marathi Film industry make a grand entry on the red carpet. Hosted by Amey Wagh and Siddharth Jadhav, the night will see accomplished actors Pooja Sawant and Manasi Nayak pay a heartfelt tribute to the late Lata Mangeshkar, an icon who moved generations with her voice. The two stars shall celebrate the stellar career and songs sung by the ‘Queen of Melody’, who left behind a lasting legacy and gave us music that will live on forever.Furthermore, showing great skill and taking the entertainment a notch higher in their individual acts will be Mrunmayee Deshpande, Sonalee Kulkarni, Vaibhav Tatwawadi and the versatile Amruta Khanvilkar in a special performance.

Talking about the upcoming edition of the awards, Mr. Deepak Lamba, CEO, Worldwide Media said, “Filmfare, for decades, has witnessed the ascent of Marathi cinema, that has always attracted cinephiles seeking compelling narratives. Having been part of this remarkable journey, we, through the Filmfare Awards Marathi, have rejoiced in shining the spotlight on this talented film industry and its exceptional cinematic performances. We are delighted to partner with Planet Marathi for a grand award ceremony that will see fans of Marathi cinema marvel at the industry’s excellence and watch their favourite celebrities perform. The stage is set as we welcome the Marathi film fraternity and take the celebrations to unprecedented heights.”

Sharing his thoughts about the awards, Mr. Jitesh Pillaai, Editor, Filmfare, said, “Marathi cinema is an integral part of India’s entertainment industry that continues to produce stellar films year on year. The iconic Black Lady has been the embodiment of cinematic excellence in the country, and we look forward to enhancing her glory at the upcoming ceremony. Proud to celebrate not one, but two terrific years of Marathi cinema, we hope to put together an entertaining show that is one of a kind and will be long remembered.”

Speaking about the collaboration with Filmfare, Mr. Akshay Bardapurkar, Founder and Chairman, Planet Marathi OTT said, “The Marathi film industry is taking slow, but gradual steps towards becoming the very epicentre of Indian entertainment. The experience of Marathi cinema is today beginning to transform the audience that consumes it. They’re all real, human, believable stories told by excellent actors and filmmakers, with simple yet gripping screenplays. We are delighted to extend our long-standing association with Filmfare that celebrates the cinematic excellence of an industry we are all very proud of.”

Sonalee Kulkarni, Actor, said, “I’d like to firstly congratulate Filmfare for yet another year of celebrating Marathi Cinema. For years, the Filmfare Awards Marathi have inspired artists to push the envelope for the coveted Black Lady. I am excited to be part of such a popular and grand ceremony where we celebrate the industry that has made its presence felt on the global stage”

Worldwide Media – India’s leading cross-platform entertainment and lifestyle content company is a part of the Times Group in India, and has a bouquet of iconic content brands Femina, Filmfare, GRAZIA India, GoodHomes and Home & Design Trends.

For almost seven decades, Filmfare has been the ultimate destination of Bollywood for die-hard fans by extending the rich legacy of the print magazine into multiple formats, avenues, and experiences. The brand also is known to keep the film-buffs updated with exclusive interviews, classy photo shoots, insider stories, sneak peeks, fashion coverage, movie reviews and special features. Filmfare captures Bollywood’s biggest stars and divas at their colourful, candid, beautiful, quirky and even spoilt best. Filmfare Awards recognizes the best talent in Indian cinema. Since their inception in 1953, they have been a benchmark of merit in the industry. While the legacy of Bollywood and South film industry editions continue, this prestigious ceremony has newer editions to tap audiences who are Marathi, Punjabi and Bengali and recently ventured into OTT awards. Filmfare recently ventured into Filmfare OTT awards as well.  The iconic ‘Black Lady’ has gone on to become the most sought-after symbol of recognition for the film industry in India and the thought of winning it is still as alluring as ever.

PLANET MARATHI OTT is the world’s 1st  Marathi OTT  which caters exclusive Marathi content in form of web series, films,talk shows, music and soon would be launching karaoke tracks, podcasts etc. Launched in August by Madhuri Dixit, the Bolyywood diva, this aims to become the World’s 1st Marathi Superapp. Chosen as one of the Promising Brands of 2021 by ECONOMIC TIMES .

Planet marathi OTT is available  on apple store, playstore and web, alongwith android TV, firestick and can be watched by  chromecast options  at a minimal rate of  Rs.365 annually. With original content being launched every month, Planet marathi ‘s goal is to become one stop destination for any kind of Marathi Entertainment.