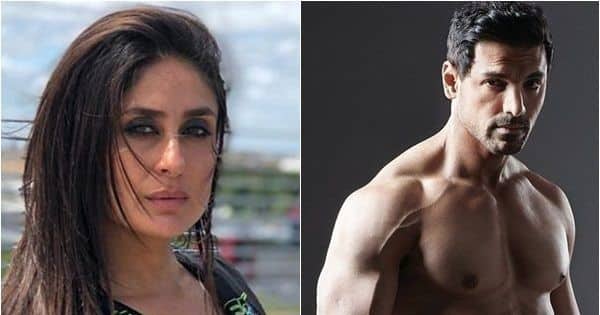 Kareena Kapoor Khan spares no one when it comes to saying the meanest things about her Bollywood contemporaries. Bebo has never shied away from taking sly digs at celebs, be it in her unabashed media interviews or while chatting with Karan Johar on Koffee With Karan. Kareena has brushed a lot of Bollywood celebs the wrong way in the past. One of them was John Abraham. Also Read – Deepika Padukone, Aditya Roy Kapur and more Top 10 viral pictures of your favourite celebs trending today

It happened on the sets of Karan Johar’s char show Koffee With Karan. Kareena had graced the Koffee couch alongwith her ex-boyfriend Shahid Kapoor. During one of the segments, the Veere Di Wedding actress was asked if she wants to work with John Abraham. To which, she had replied, “I don’t want to (work) with John Abraham because he is expressionless.” Her statement had infuriated Bipasha Basu was dating John back then. Also Read – Katrina Kaif, Kareena Kapoor Khan, Alia Bhatt and other actresses show you what to wear on a beach vacation – view pics

Later, when John and Bipasha appeared on the same season, Karan had asked their reactions about Kareena’s statement. While John gave it a pass, Bipasha went on to say, “She (Kareena) is someone with too many expressions.” Till date, we have not seen Kareena and John working together in a movie. Also Read – Kareena Kapoor Khan, Karisma Kapoor and Natasha Poonawala look hot in bikini as they enjoy their beach vacation in Maldives – View Pics

As they say, what goes around… comes around!

Meanwhile, Kareena is all set to make her streaming debut in a murder mystery based on Japanese author Keigo Higashino‘s novel, The Devotion of Suspect X. The yet-to-be-titled film will be directed by Sujoy Ghosh (Kahaani, 2012; Badla, 2018) and also stars Jaideep Ahlawat and Vijay Varma. Streaming platform Netflix announced the film through a video of Kareena, Jaideep and Vijay during a script reading session for the film led by the director. She will also be seen in Aamir Khan’s much-awaited film Laal Singh Chaddha.