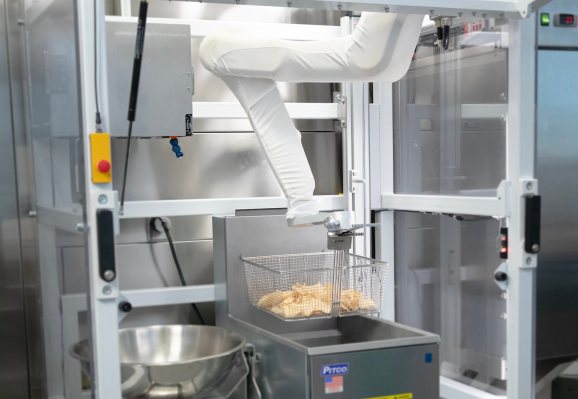 From the company that gave you Flippy, the hamburger-cooking robot arm, comes Chippy, which does the same for tortilla chips. Miso Robotics today announced that it has teamed with fast casual Mexican restaurant chain Chipotle to develop a system designed to deep fry and season chips — not too much of a stretch, really, after Flippy 2 figured out how to make French fries for White Castle last year.

The new robot/AI system is currently being tested at the chain’s Cultivate Center food laboratory in Orange County. It expects to start testing Southern California restaurants at some point later this year. Like the Flippy roll out before it, the Chippy’s maker will be using the testing period to determine what works — and doesn’t — for employees and customers alike.

In addition to dipping the basket into the vat of hot oil, the system is also designed to season the chips with salt and lime juice. Chipotle says a little chaos is a key to adding some humanity back into the system.

“Everyone loves finding a chip with a little more salt or an extra hint of lime,” said Nevielle Panthaky, vice president of Culinary, Chipotle. “To ensure we didn’t lose the humanity behind our culinary experience, we trained Chippy extensively to ensure the output mirrored our current product, delivering some subtle variations in flavor that our guests expect.”

Chippy joins Flippy and Miso’s soft drink dispenser, Sippy. Can Tippy, the serving robot or Trippy, a weed concierge robot, be far behind?