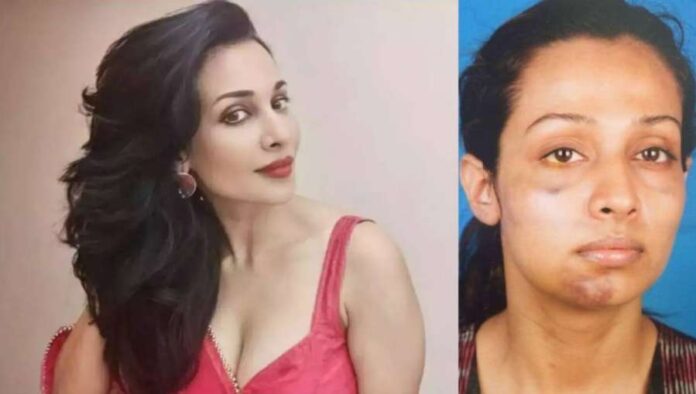 New Delhi: ‘Stree’ fame Flora Saini is famous for her acting and beauty. But when the #MeToo movement came to the fore, Flora’s name was also included in those who narrated their ordeal at that time. Flora is once again in the limelight for talking about domestic violence and sexual harassment that happened to her. In an interview, she recalled the bad phase of her life when her boyfriend beat her up. What Flora has endured is so appalling that even the listeners get goosebumps.

Boyfriend had crossed the limits of brutality

Flora has told that in 2007 she has been a victim of domestic violence and sexual harassment at the hands of X boyfriend. However, Flora first spoke publicly about being abused by her ex in 2018 during the #MeToo movement. Now, Flora has revealed that her boyfriend threatened to kill not only her but also her parents.

In this interview, Flora said that she left her home to live with filmmaker and her ex-boyfriend Gaurang Doshi. Because Gauranga asked her to prove his love for her. He said that he was so cute in the beginning that his parents started to feel less in front of him. Flora talks about the murder of Shraddha Walker, who was killed by her boyfriend and live-in partner Aftab Poonawalla in Delhi. Flora remembered that her ex had taken away her phone so that she could not call anyone.

Flora said, “Your parents see the coming danger. Same happened in Shraddha’s case. That boy cut off from the family first. I too had left my house and within a week of living with him , I was being beaten. I could not understand why he was suddenly beating me, because in my eyes he was a very nice boy.” While Flora’s parents warned them. Flora said that even when he hit her, she felt it was her fault. She said that he also threatened to kill her and her parents when she told him that she wanted to leave him.

beaten so much that jaw was broken

Flora recalled her ordeal, “One night, he beat me so hard that I broke my jaw. He took his father’s picture and warned me that I swear on my father that I will kill you tonight. When he turned back to put the photo frame back, in that fraction of a second, my mother’s voice echoed in my ears that at such a moment you have to run – just run, don’t think whether to wear clothes or not Money or not, just run away. I ran home and I decided I was never going back.”

Has appeared in these films

A popular face in South Indian cinema, Flora has appeared in Hindi films like ‘Love in Nepal’, ‘Dabangg 2’, ‘Laxmi’ and ‘Dhanak’. Along with this, Flora is known for playing the role of a ghost in ‘Stree’. Recently, a sequel to the 2018 film was announced. In an interview, Rajkummar Rao had confirmed ‘Stree 2’.