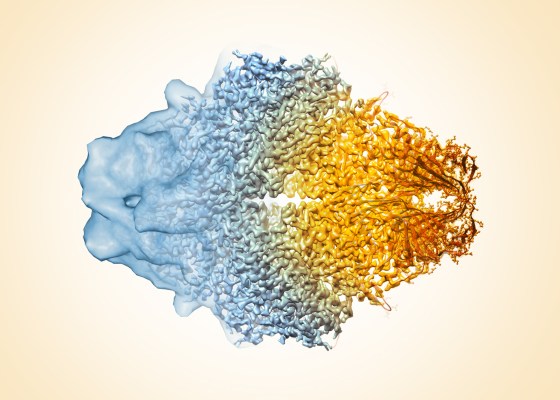 The field scientists once jokingly called “blobography” has come a long way.

Cryogenic electron microscopy was formerly known for delivering amorphous images of biomolecules. Now it has become one of the highest fidelity methods available for viewing the body’s smallest building blocks. It’s also a key pillar of Gandeeva, a new biotech company that emerged from stealth on Monday with a $40 million Series A round. The company plans to combine this high resolution imagery with a suite of machine learning tools to speed up the process of drug discovery.

“It took about 15 years of dedicated effort to achieve this dream we had when we started: to literally visualize proteins in an electron microscope at atomic resolution. Once we and others showed this could be done, it was clear to me that this was the critical tool needed to transform and revolutionize drug discovery,” co-founder and CEO Sriram Subramaniam told TechCrunch.

Gandeeva’s thesis, he continues, is about creating a platform that can actually learn from the current advances in cryo-Em. The idea is that these high resolution images can help reveal previously unseen pockets for drugs to bind to, if, we can find drugs that fit the bill

“Having the tool to dig for gold is one thing, but you need to know what to do with that – what product to convert it into. And in our case that’s medicines for patients,” he said.

There are lots of companies tackling the mammoth problem of drug discovery at the moment. Gandeeva’s approach, put extremely bluntly, is that seeing is believing when it comes to finding druggable targets in the body.

Countless scientific breakthroughs have been achieved by simply observing the world around us. But when it comes to the body’s building blocks, this is impossible without specific microscope techniques. The leading technique in this field for decades has been X-ray crystallography, in which a scientist literally packs proteins or molecules together into a crystal and shoots X-rays at it, approximating its shape, size and orientation.

The issue with X-ray crystallography was the crystallization bit – this process is arduous and time consuming. The upside of cryo-Em is that it doesn’t require crystallization. Instead, the molecules are flash frozen, creating a 2D sheet, that’s then shot with an electron gun. This sheet protects the biomolecule from the electrons and allows for the capture of detailed images. That sheet also allows for scientists to capture the motion of biomolecules, a process that’s not possible with a crystal-encased structure.

For example, it’s possible to obtain images of structures as small as two ångströms across – that’s one tenth of a nanometer. (For reference, the width of one human hair is about 1 million ångströms).

There’s some evidence that cryo-EM is in the midst of a boom. As Nature reported in February 2020, some scientists have predicted that more protein structures will be determined by cryo-EM than X-ray crystallography by 2024. It’s becoming a bigger part of the scientific toolkit – despite the sometimes prohibitively expensive costs of microscopes and equipment needed to perform the technique – because resolution has vastly improved.

Meanwhile, there are other developments in structural biology working in Gandeeva’s favor. For one, advances in machine learning have made it possible to predict exactly how proteins fold.

Specifically, we’ve seen the development of two AI engines capable of predicting how proteins fold: AlphaFold, developed by Alphabet-owned AI outfit DeepMind, and RoseTTAFold, developed at the University of Washington. While it used to take hours of lab work to determine protein structures, RoseTTAFold claims to be able to predict that structure in ten minutes, on a regular gaming computer.

Subramaniam has argued that these tools provide an unprecedented level of insight into protein structure and function, but that there will still be gaps to fill (for instance, there are some elements of the AI predictions that are lower confidence than others). Cryo-EM, he notes, allows scientists to zoom in on specific areas of a protein, or capture images of proteins in many different conformational states (think wiggles), perhaps filling those gaps.

“We have this whole new revolution happening in AI, and I think everyone is wondering: what does this all mean? This combination of AI and cryo-EM, which was always Gandeeva’s thesis, is really the ticket because it’s not just experimental alone or prediction alone,” he said.

“You can [use] these AI-based understandings of structural biology and interactions and combine that with precision imaging at the highest speed at the right throughput.”

So far, Gandeeva is aiming to prove that cryo-EM can actually be done quickly and easily outside of a government or university sponsored context. That’s important, because much of Subramaniam’s work in this field has come in those environments.

Subramaniam spent the bulk of his career at the NIH, where he was chief of the biophysics section at the National Cancer Institute. From there he went on to found the the National Cryo-EM facility, a government-run lab. At the NIH, he hoped to get moving on Gandeeva’s cryo-EM based drug discovery platform, and realized that developing the lab alone would cost billions.

At that time, “VCs had no interest in that kind of approach,” he said. But the University of British Columbia did. He left the NIH to become Chair of Cancer Drug Design at the University.

“In the last few years that I’ve been here, I set up this essentially to show that I could repeat what we did at the NIH. So at UBC, I was able to create a prototype and that’s really what persuaded investors this could be done at speed,” he said.

His proof-of-concept came in the form of a rapidly-produced cryo-EM image of the Omicron variant’s spike protein, published in Science.

Ultimately, though, Gandeeva isn’t just packaging cryo-EM in hopes of taking pretty biological pictures – it’s a research platform aimed to cut down the time it takes to create new drugs.

“We do think that we can shave a lot of time off simply because of the power of looking at exactly where the drug binds, and what protein surfaces it targets. That kind of information is extremely powerful because it prevents you from following dead end pathways,” Subramaniam said.

The company will have to prove that it can perform this techniques at industrial speed and scale, and glean information that can’t be found elsewhere. Gandeeva has a six-year lease on a facility outside of Vancouver, where Subramaniam plans to build out the functionality of his platform.

Internally, the goal is to advance a few programs to prove that they can identify potential drug targets. Subramaniam said that if he had to guess, he’s likely start applying Gandeeva’s platform to oncology – but that’s not set in stone.

This round was led by Lux Capital and LEAPS by Bayer. The round includes participation from Obvious Ventures, Amgen Ventures, Amplitude Ventures and Air Street Capital. The company has raised $40 million to date.