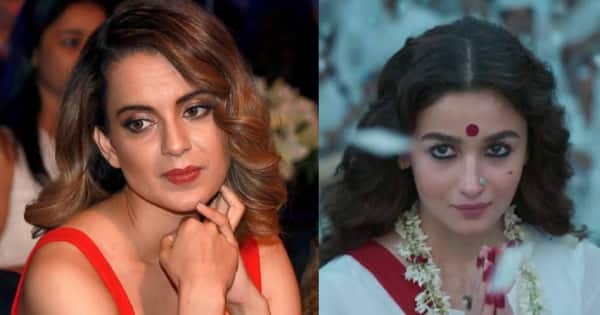 Alia Bhatt‘s Gangubai Kataiwadi’s trailer and songs have got terrific reactions from the audience and critics. However, there is a certain section that believes Alia is a misfit to play Gangubai as she looks younger than her age. While there have been a lot of comparisons of her performance in Gangubai with Kangana Ranaut and Vidya Balan‘s past performances Reacting to it a per quoted by Indian Express Alia says, ” “No, I have not heard any of this.” Further adding on Kangana being the cast and not she to which she said, ” Yeah, people must have suggested casting. But I feel like one should not get into it… Somebody who is a director who has been working for 25 years knows whom to cast in their main lead. I was okay with people thinking I was not right for the part because that is their perspective.” Alia in her interview with India Today had said that people have the biggest conception about her that she gets everything on her plate which is not true. Also Read – Gangubai Kathiawadi’s family slams Alia Bhatt’s film for ‘vulgar’ portrayal; ‘Turned my mother into a prostitute’

Recently she had the perfect response to people who think she is the misfit for the role, “Firstly, she’s not old. She is 30 so take the thought out that I am playing an older woman. The thing is, we don’t have much information on Gangubai. The one picture we got of her, in black and white, she’s old. So there’s a feeling that ‘Oh, she’s Gangubai and Alia’s wrong.’ Obviously, in that context, I am wrong (for the role). But it’s not character. Gangubai became powerful very young in her life. That was one of the facts that she became a caretaker of a brothel at a very young age. Things in her life happened very fast, at a very young age. We had to show a transition from the age of 16-17 to the age she’s shown in the film, which is 31-32”. Do you think Kangana would be the better choice? Drop your comments in the box below. Also Read – WTF Wednesday: Is Kangana Ranaut’s objection to kids imitating Alia Bhatt’s Gangubai character valid? Vote now