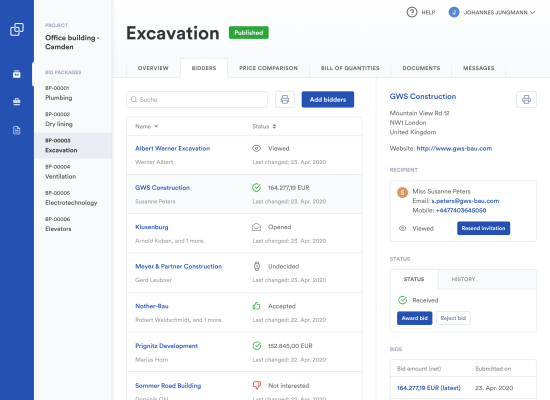 Construction is one of the largest industries in the world but amongst the least open to new technology. It also requires a great deal of collaboration, which makes it an ideal playground for tech startups.

Cosuno says it creates collaboration between all parties involved in the construction process, mapping the processes from planning to payment. Subcontractors are involved in planning at an early stage and can pay via the software platform.

The startup claims planning stages can be reduced by up to 60% and profit margins can be 18% higher on average. It says a construction volume of more than $4 billion has already been processed via the platform.

Speaking to me over a call, Fritz Cramer, founder and co-CEO of Cosuno said: “It’s basically a SaaS product for procurement. We call it pre-construction.”

A similar model from the US is Built, which has become a unicorn, but Cramer claims that, while similar, Cosuno offers more features.

“Built does invoicing and payment but we also do the steps before, which is planning your building inside our software. You have a marketplace of subcontractors, so you get lots of offers in the tendering process. We have the biggest marketplace in Europe of subcontractors and you can access them through the software. And then you have invoicing and payments and that’s in a nutshell what we do,” he said.

Together with their team of 140 people, Cosuno plans to improve the product and expand in Europe.