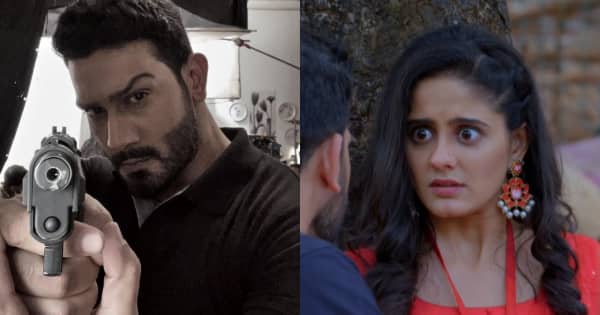 The fans of Ghum Hai Kisikey Pyaar Meiin were entertained by the scene where Sai refuses to believe that Shruti is his wife and not Virat. She gets angry at Sada for making up such stuff. She also alleges that the kidnapping has been orchestrated by Virat to make her suffer. Sai is just not ready to believe that Shruti is Sada’s wife and Sahas is his baby. Sada gets all confused and mad that she thinks the kidnapping is fake. Apart from this, Vineet Kumar Chaudhary is getting a lot of praise. His acting chops as Sada are being appreciated by the fans. Some even appreciated their screen presence together. Let’s check out the Twitter reactions here: Also Read – Kundali Bhagya’s Shraddha Arya REFUSED Star Plus’ Smart Jodi for THIS reason? [Exclusive]

#GhumHaiKisikeyPyaarMeiin
This girl has already seen so much drama that she has become a script writer herself planning n all ??

Anyways I don’t blame her bcz she doesn’t even know what all happened after mall incident, Sada never came in picture for her so how to agree pic.twitter.com/PYkhWH8bGi

Her thinking this is legit becoz Mr Mahaan did not even bother to inform S that Sada is killed in encounter.He says he is worried for fam & S safety & does not even think what Sada can do now #GhumHaiKisikeyPyaarMeiin https://t.co/rL8Tt3qKqw

#GhumHaiKisikeyPyaarMeiin
Sada convincing Sai that Shruti is his wife was actually funny ???
He is like “Shruti meri biwi hai “on repetitive mode and Sai be like yeh prove krne ke liye you and Virat did planning??
My girl was legit on different tangent today.

Her thinking this is legit becoz Mr Mahaan did not even bother to inform S that Sada is killed in encounter.He says he is worried for fam & S safety & does not even think what Sada can do now #GhumHaiKisikeyPyaarMeiin https://t.co/rL8Tt3qKqw

Loved #VineetChaudhary scene with #AyeshaSingh today.Both were awesome.The chemistry & exchange was superb.Everything was so organic & natural.The acting did not seem forced at all which is happening with the ML nowadays #GhumHaiKisikeyPyaarMeiin

???? Girl is so done with happenings in her life bcz of Virat and this was so true.

Sada you better have done hand to hand with chirkut Virat

Oh man!! Vineet has such a towering screen presence. He’s not as good as Siddharth Bhodke when it comes to being menacing and funny at the same time, but he is fun to watch. I’m glad he only has a short role, nahin toh yeh bhi acting bhool jata. ? #ghumhaikisikeypyaarmeiin

He is an actor par excellence & works in loads of shows. For once have not seen him take his role 4 granted b it yhm,BALH or now.He acts really well as an out & out villain.Even when he is acting negative his chemistry with S & the exchange was superb #GhumHaiKisikeyPyaarMeiin https://t.co/wVVDDRxpAI

Sada must be regretting why he has not killed Virat and kidnapped Sai. Sai ne uss naxal ke hosh uda diye?…good going Sai, Sada will always remember you kisse panga le liya ?..Sada u still have a chance take ur revenge by killing VC,warna pachtaaoge#GhumHaiKisikeyPyaarMeiin https://t.co/CbSvvUXspf

??? yaar but their convo was super good and I loved how sada was irritated with sai.#GhumHaiKisikeyPyaarMeiin https://t.co/hrvEy9xvzg

I laughed on Sada n Sai scene.Although this was definitely shown as very serious,intense n turning point moment for story as it was meant to clear misunderstandings,but it was turned out to b comedy 4 me.Its not Romantic,its comedy show now #GhumHaiKisikeyPyaarMeiin @sidd_vankar

Meanwhile, the rest of the Chavan believe Virat is behind Sai’s kidnapping. They all are shaming him for the same. Everyone has been misunderstanding Virat and the latter keeping mum has been a drag fest and irksome for the fans. Also Read – Ghum Hai Kisikey Pyaar Meiin: ‘BRING BACK FIERCE SAI JOSHI’ trends as fans don’t want Sai to apologize and white-wash Virat’s image