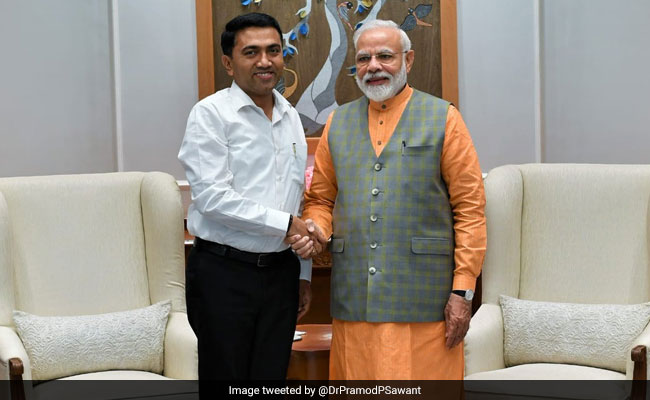 Goa Chief Minister Pramod Sawant is in Delhi to meet with Prime Minister Narendra Modi ahead of state election results on Thursday.

The meeting is significant with exit polls predicting a hung verdict in Goa, which voted on February 14.

Mr Sawant, say sources, will brief the Prime Minister about the party’s prospects of retaining power in Goa.

This is the BJP’s first election in the seaside state after the death of Manohar Parrikar, the charismatic former Chief Minister who died in 2019.

After the meeting, Mr Sawant will go to Mumbai, where he and state BJP president Sadanand M Shet Tanavade will meet with the BJP’s Goa in-charge, Devendra Fadnavis.

Mr Fadnavis is believed to be in talks with the Maharashtrawadi Gomantak Party (MGP) for an alliance. The BJP is also ready to reach out to independents.

The BJP has dismissed exit poll predictions in Goa and has expressed confidence that it will be single-largest and in a position to form government.

The poll of exit polls after the end of voting yesterday showed a neck-and-neck fight in Goa.

Both the BJP and the Congress are likely to win 16 of the state’s 40 seats, falling short of the majority mark of 21, according to NDTV’s poll of exit polls.

Mamata Banerjee’s Trinamool Congress, which debuted in Goa in this election, has been given three seats, which suggests that it could end up playing kingmaker in a race for majority. The Trinamool contested the election in an alliance with the MGP.

A similar turmoil followed the 2017 election in Goa, when the Congress emerged single-largest with 17 seats but failed to take power. The BJP, which had 13 seats, took power after tie-ups with smaller parties, including the MGP, and independent MLAs.

In 2019, when Mr Sawant took over as Chief Minister after Mr Parrikar’s death, two MGP ministers were dropped. The MGP has said it will not back the Pramod Sawant-led BJP, but the Chief Minister says there are “no personal differences” with the party.