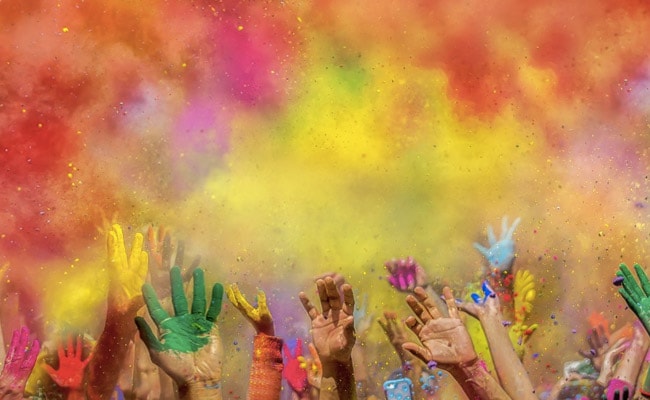 Holi wishes: The Mumbai Police posted a message on social media on Holi 2022.

The Mumbai Police on Friday advised people the play Holi safely and be in their senses. They have warned that people who do not pay attention to the message will be caught “red-handed”.

“Play with colors, not imagine them! We will catch you ‘red-handed’ otherwise,” the Mumbai Police posted on Instagram and its other social media handles.

An image, which is part of the post, carries the text: “Let’s Not Holi-cinate.”

“Omg gold,” said a user on Instagram. “Too good,” added another.

The President wished “enthusiasm and new energy in the lives of all the countrymen” while PM Modi wished for “mutual love, affection and brotherhood” among the people on Holi.

Marking the onset of the spring season, Holi is a festival of colours, symbolic of joy and victory of good over evil.

In Uttar Pradesh’s Barsana, Mathura and Vrindavan areas, Holi begins from Basant Panchami and continues for more than a month.

Barsana, a small town situated approximately 42 km from Mathura is famous for its Lathmar Holi celebration. Women run after men with ‘lathis’ or sticks and playfully hit them during this celebration. The men, on the other hand, come prepared with a ‘dhal’ or shield.

Thousands of devotees and tourists visit Mathura and Vrindavan to witness this frenzied version of Holi.

The festival of colours is celebrated across India with zeal. People throw “gulaal” or dried colour on each other and sing and dance to mark the festival.