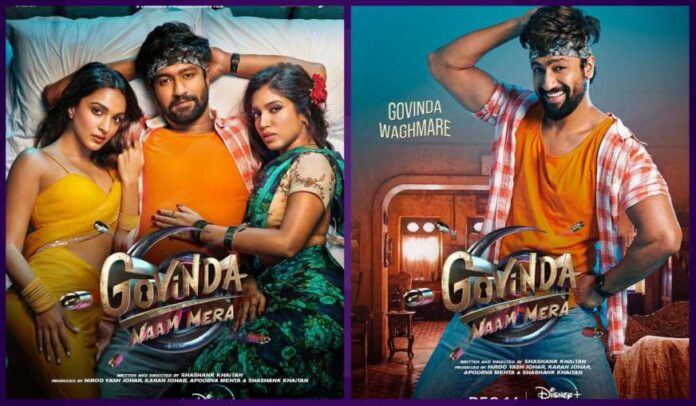 Govinda Naam Mera Trailer: The trailer of Vicky Kaushal, Kiara Advani and Bhumi Pednekar’s upcoming film ‘Govinda Naam Mera’ has been released today. The film will not be released in theaters but on the OTT platform. You will not stop laughing after watching the trailer of this film. The fans are now eagerly waiting for the release of the film.

In this trailer, Bhumi Pednekar is playing the role of wife and Kiara Advani is playing the role of girlfriend. Bhumi Pednekar’s style looks quite cool. At the same time, Kiara Advani, who became girlfriend, is winning the hearts of fans along with Vicky Kaushal with her style. The trailer of ‘Govinda Naam Mera’ is of 2 minutes 30 seconds. The trailer begins with a romantic scene between the husband and wife. But after some time this romance completely turns into comedy. In the beginning of the trailer it is shown that Vicky Kaushal is sleeping in bed with wife Bhumi Pednekar. But he is seeing Kiara in his dream and both are coming closer to romance. But then Vicky gets kicked by his wife Bhumi Pednekar. It is shown in the trailer that Vicky Kaushal gets fed up with his wife and plans to kill her. But during the same time someone else gets murdered. Because of which Kiara Advani and Vicky Kaushal have to go to jail. Now it has to be seen how Kiara and Vicky prove themselves innocent.

Vicky Kaushal, Bhumi Pednekar and Kiara Advani’s film ‘Govinda Naam Mera’ will be released on Disney Plus Hotstar on 16 December. Please tell that this film is directed by Shashank Khaitan.