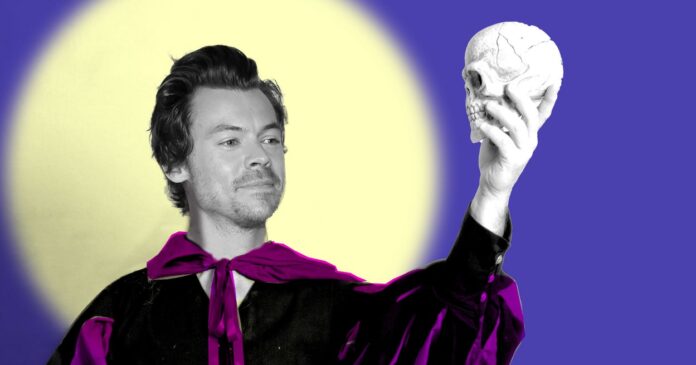 Styles plays Tom, a simple beat cop who begins an awkward courtship with Marion (Emma Corrin), a teacher who is frustrated that their relationship isn’t moving forward fast enough. When Tom introduces her to Patrick (David Dawson), a museum curator with refined taste, the three form a close bond that is later threatened when Marion discovers that Tom and Patrick’s relationship is far more intimate than she first thought.

In the scenes set in the ’90s, we discover that Tom and Marion (played by Gina McKee and Linus Roache) are still together in their retirement, but when Marion brings home a now-ill Patrick (Rupert Everett), the dissolution of the past triad comes back to haunt all three.

Michael Grandage’s film, an adaptation of the 2012 novel by Bethan Roberts, depends highly on the connection between past and present: You need to believe the characters in the ’90s are marked, and perhaps tortured, by the events of the past. Regrettably, the film’s primary device for getting this across are long lingering glances and shots of a lovely beach. There’s little believable continuity between the younger and older versions of the characters. Policeman is not a failure of a film — it just doesn’t amount to much.

But Styles’s involvement in the film is definitely of interest. It was Styles who sought out the role — Rolling Stone reported that he read the script and requested a meeting with Grandage (“Styles showed up with every line memorized,” notes the story). While plenty of straight or straight-passing actors have played gay characters before, with Styles the move has the added dimension of potentially telegraphing something about the singer’s celebrity, too: Those unfamiliar might perhaps find themselves surprised by the depth of the conspiracy theory that Harry Styles has long been in a relationship with his former bandmate Louis Tomlinson (ship name: Larry Stylinson).

His My Policeman role collides rather too neatly with the insistent discourse of whether Styles is queerbaiting. In the same Rolling Stone profile, he is tastefully opaque: “I think everyone, including myself, has your own journey with figuring out sexuality and getting more comfortable with it.” Styles doesn’t owe the public his sexual orientation, but he has quietly turned the relationship speculation into a bit of theater. (On speculations about his relationship with his Don’t Worry Darling director Olivia Wilde, he simply noted, “I don’t think I’ve publicly been with anyone.”) For this to be only his third film, pursuing the part of a character who chooses to hide his sexuality with a straight-presenting relationship is rather on the nose. As Alison Willmore noted in Vulture, Policeman “feels like it’s part of a larger calculation intended to drive the remnants of a certain obsessive swath of his fanbase out of their gourds.”